The estimable Angela Keaton crystallized the war in her last post (below). The war becomes difficult for the establishment to talk about when it is presented as it is by the video of injured Iraqi children. They can’t inject their technocratic policy-wonkery, and even nationalistic themes and Exceptionalist rhetoric is grossly misplaced.

Such is the power of video, so I thought I’d post some others from the Afghan war to the same effect. For context, civilian casualties in Afghanistan have seen a sharp rise in 2011.

In a US airstrike in July, 14 civilians were killed, 8 of them children. In May, US soldiers killed a 12 year old Afghan girl in a night raid. In March, nine Afghan boys collecting firewood in eastern Afghanistan were annihilated by US airstrikes. US-supported Afghan militias have recently beat children, hammered nails into the feet of a young boy, and gang raped another 13 year old boy. In February of last year, a US night raid killed a teenage girl and two pregnant women. In September of last year, NATO attack helicopters bombed seven civilians, four of them children. A UN report last year found that almost 350 Afghan children were killed in 2009 alone. 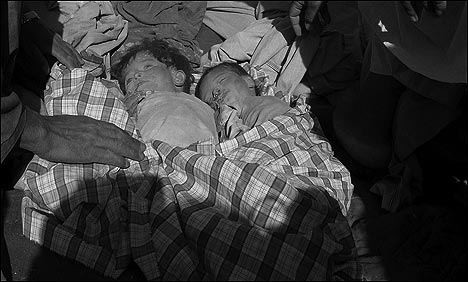 In another video, from back in 2008, the Guardian covers various incidents of atrocities against Afghanistan civilians by coalition forces. It doesn’t allow embedding, so click the link to see it. Here’s a quote from one of the people interviewed the the video’s corresponding article:

And yet all Barack Obama and his minions in Congress can talk about regarding the Afghan war is the extraordinary service of American soldiers, lies about Afghan security, and arbitrary dates which we are misleadingly told will see an American withdrawal. The useless, aimless, lie of a war continues unabated, without any attention paid to children like Grana.

28 thoughts on “Killing Children in Afghanistan”