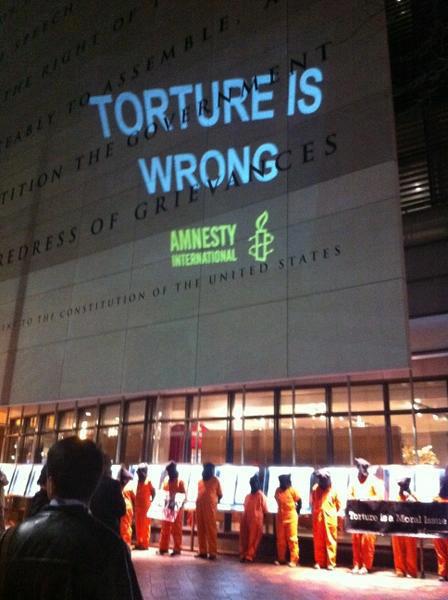 The third, far less known issue involves the resignation (effective on January 11) of Suzanne Nossel, Director of Amnesty International-USA.  Her resignation after only one year as American Director would be unimportant except for how it exposes more fundamental problems involving the way human rights principles during peace time and humanitarian rules governing warfare can function to undercut the more well established jus ad bellum prohibitions, under international law, of launching wars of choice.  Nossel’s statement itself gave little clue of the more fundamental problematic issues underlying her resignation (except for the fact that she only mentioned her appreciation for working to uphold “human rights” in the Soviet Union, Afghanistan, Myanmar and Syria ­but left out the human rights violations that the US-NATO-Israel is responsible for).

There’s no need to rehash the points we tried to make in “Amnesty’s Shilling for US Wars” (co-authored with Col Ret’d Ann Wright) and “Are Human Rights Becoming a Tool of US ‘Smart Power?” which described the way Nossel personified some of these revolving door conflicts of interest plaguing human rights and humanitarian non-governmental organizations (NGOs) based in the West.  It’s simply not possible for anyone to constantly go back and forth from serving US national interests vis a vis other nation-state sovereigns in the world to the theoretically loftier role of promoting human rights around the world as head of a non-governmental organization whose credibility depends upon not being aligned with any country’s national interests.

To be sure, these conflicts of interest did not begin with Suzanne Nossel but have a long history which also reside in the NGO’s donor base according to former Amnesty-USA Board member Francis Boyle. There seems to be an even more fundamental problem, however, engulfing not only Amnesty but a great many other “human rights” NGOs and academics based in the United States and its western allies.  Amnesty’s verbatim response back in June to our “Amnesty Shilling for Wars” article was telling:

Among many distortions in this post, it is ludicrous, offensive and  irresponsible to suggest that Amnesty International USA’s work on Afghan  women’s rights is being scripted by the Central Intelligence Agency “Red Cell” report of 2010. Amnesty International has been monitoring and reporting on Afghanistan for decades, and we have been issuing statements and reports pertaining to the human rights of women in Afghanistan since at least the 1990s.

AI’s advocacy is based on our own independent research into human rights abuses in a given country. As a matter of longstanding policy, we remain independent of governments, we do not espouse political ideologies or systems of governance, and we do not take positions on armed intervention. We did not call for NATO’s involvement in Afghanistan, we are not calling for NATO to remain in the country, and we are not praising NATO’s actions in Afghanistan or elsewhere. The Shadow Summitwas exclusively about the right of women in Afghanistan to participate in political decisions that will impact their lives. In order to press for them to be at the table, it was necessary to direct our message to the entities who set the table. This is no way breaches our independence or impartiality.

Apparently this “longstanding policy” also led Amnesty and Human Rights Watch to take no position regarding the US launching of the Iraq War in spite of large world-wide protests as well as widespread knowledge, including amongst key UN officials and monitoring agencies, that US politicians were deceptively ginning up a “war of choice” on Iraq.  Moreover, such a “policy” simply ignores the entire huge body of international law known as jus ad bellum or “just war theory” upon which the Kellogg Briand Pact, UN Charter and Nuremberg Principles are based, premised upon nation-state sovereignty and equality.  Firmly established international law holds that a nation commits the “supreme crime” by launching an unjustified “war of aggression” since such a war tends to give rise to and encompass the other (lesser) war crimes and humanitarian abuses. Countries are consequently prohibited from launching such “wars of choice” as tools of foreign policy. So any “non-governmental organization” that dismisses jus ad bellum and states it’s only concerned with the two bodies of international “human rights” and “humanitarian law of warfare” (jus in bello military law, i.e. which aims to restrict hurting and killing of civilians and prisoners of war as well as prohibiting the use of torture and cruel and inhumane treatment during warfare) is choosing to see the trees instead of the forest.

In fact the common theme of US government and military lawyers since 9-11 has fully borne out the rationale for the Nuremberg Principle, that wars of aggression are the supreme crime.  US militarists have essentially argued the need to “go to the dark side”, because the jus in bello “humanitarian law of warfare” is “increasingly obsolete” and/or has failed to keep pace with how “terrorists” operate outside the Geneva Conventions.  One might imagine some of the British Redcoats similarly pleading with the King to bend their rigid rules and regimentation in order to more effectively combat the American revolutionary soldiers who were picking them off from behind trees and fighting more of a guerrilla war.  Simply put, ignoring the commission of the “supreme crime” will inherently and always lead to a certain amount of hypocrisy and complicity.

International law professor Richard Falk recently gave a rather long interview on the “The Future of International Law and Human Rights” in which he was asked about this.  He generously described this issue as “tricky”, explaining that:

Human rights and international criminal law both illustrate the contradictory potential of international law. On one level, the imposition of human rights norms is a restraint on interventionary diplomacy, especially if coupled with respect for the legal norm of self-determination. But on another level, the protection of human rights creates a pretext for intervention as given approval by the UN Security Council in the form of the R2P (responsibility to protect) norm, as used in the 2011 Libyan intervention.

Falk’s interview deserves to be read in its entirety even though it’s geared to those with some prior understanding of how international law has evolved and is evolving; its inherent weaknesses and double standards based on current geopolitics.  Ironically, not long after this interview, the international law icon (he co-authored the international law textbooks that I studied from at the University of Iowa Law School in the late 1970s) and “UN Special Rapporteur” on Human Rights, was himself expelled from Human Rights Watch.

Consider whether Amnesty International or Human Rights Watch has ever questioned the new US doctrine of “pre-emptive or preventative” wars, key to the notion of the US “global war on terrorism.”  Have “humanitarian/human rights NGOS” criticized NATO’s bombing of Libya or US (and allied countries’) threats to use military force on Syria and Iran (or the harsh sanctions provocations) in pursuit of “regime change?”  The jus ad bellum body of international law which even the “Bush-Powell Doctrine” was to some degree based on after Vietnam has now become almost totally ignored and forgotten whereas international “human rights” and humanitarian bodies of law are increasingly in vogue.

The human rights movement does not seem to worry much if at all about militarily weaker nation-states being protected from stronger military powers.  If this is the model for human rights enforcement, the clear result is to undermine nation-state sovereignty and to undermine the more firmly established law prohibiting wars of aggression.

If “human rights NGOS” do work totally independently of any government—and some like the Red Cross appear much more careful to do so—it would seem fine for the two systems of international law to operate, in an overlapping but independent fashion.  But when “human rights organizations” join hands with powerful governments, as seen when many recently stood with and applauded the creation (at the instigation of Madeline Albright and Samantha Powers) of the US Atrocity Prevention Board, that’s where the problem emerges.  Amnesty’s and other human rights organizations’ attempt to enforce human rights law around the world through entwining themselves with US-NATO-Israel’s military force as a kind of supreme international human rights policeman of the world, can in fact, lead to the deaths of the people they say they are trying to help.

These human rights NGOs, not just Amnesty, seem to disdain the old international law, even more firmly engrained, built as it was upon the old order of nation-state sovereignty but which, in addition to jus ad bello included the jus ad bellum body of law which held that unjustified wars of aggression, aka “pre-emptive wars” and wars of choice involving covert incitements, international political assassinations, etc were/are highly illegal.  Truly credible and independent humanitarian efforts to help individuals are inherently ineffective when entwined with any government’s national interests.  The Red Cross may be an example of a human rights effort operating internationally that seems to do a better job of maintaining independence from any particular government’s national interests (even in difficult war situations).  Greg Mortenson’s efforts described in Three Cups of Tea to build schools in Afghanistan-Pakistan, on the other hand, and which were originally begun independently, appear on the other hand, as an example at the other end of the spectrum as Mortenson later developed a relationship with General Petraeus and the Pentagon.  Such “human rights” and democracy promotion efforts that are entwined with US-NATO-Israel’s quest for “full spectrum dominance” through military force­ as a kind of “policeman of the world” theory­ seem to totally pervert the human and humanitarian bodies of law and become nothing but a way of selling wars of aggression as a kind of “white man’s burden .”

Human rights proponents might rationalize that the old jus ad bellum law premised as it was on nation-state sovereignty is no longer valid and they want to see a new world order arise, a kind of “citizen of the world” paradigm where individuals’ rights do not depend upon any one sovereign nation’s government.  But even if this is the case, a clearer explanation or critique­ is needed to show how these two main bodies of international law can conflict, be exploited and/or play out and backfire in a world where old nation state sovereignty may or may not be giving way to a new global order.

28 thoughts on “The Problem with Human Rights/Humanitarian Law Taking Precedence over the Nuremberg Principle: Torture is Wrong but So Is the Supreme War Crime”