A group of about 200 Palestinians have set up a small tent village – basically camping out – in the territory in East Jerusalem described by Israel as E1. They say they plan to start building a new Palestinian village there under the name Bab As-Shams. 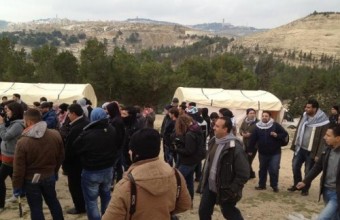 These Palestinians and activists are basically saying: two can play at this settlement game.

First friday prayer in the newly created village of #BabAlShams #Palestine the village was created today near Za’I’m twitter.com/Tweet_Palestin…

Following the overwhelming UN vote for implicit recognition of Palestinian statehood in November, Israel authorized the construction of 3,000 more housing units in East Jerusalem and the West Bank and is also speeding up the processing of 1,000 additional planning permissions.

According to the New York Times, the bulk of the new housing units Israel has plans for are set to be built “in a controversial area of East Jerusalem known as E1, where Jewish settlements have long been seen as the death knell for a two-state solution to the Israeli-Palestinian conflict.”

The settlement would connect Jerusalem and the illegal Jewish settlement of Maale Adumim, and “therefore make it impossible to connect the Palestinian cities of Ramallah and Bethlehem to Palestinian neighborhoods of East Jerusalem.”

Israel has issued an eviction notice to the Palestinian settlers, ordering them to evacuate their own land. Apparently, the Israelis don’t like it when Palestinians settle on land Israel thinks is its own.

35 thoughts on “Palestinian Activists: Two Can Play the Settlement Game”