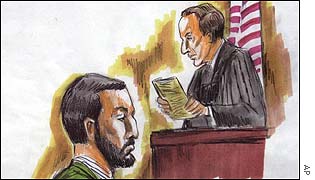 So maybe al Qaeda exploited US jihad support prior to Sept 11, 2001, but since then the government has been kicking the terrorists’ butts. Right?

According to a new Syracuse University study, in the 2 years after the Sept 11 attacks the Justice Department resolved 2681 terrorism-related cases referred by investigators. Of these:

– 14 resulted in not guilty verdicts. Of the remaining 879 cases:

– 260 were sentenced to the time they had already spent in jail, and were released. Of the remaining 113 cases:

“Terrorism cases fizzling out in US courts: study,” LA Times:

“…[W]hile 184 people have been convicted of crimes deemed to involve ‘international terrorism,’ defendants were sentenced to a median prison term of just 14 days.”