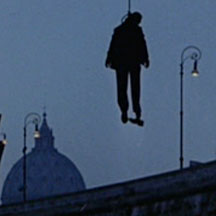 From “Murky Goings-On” in this week’s Economist:

WHO provided the early finance for Fininvest, the parent company of Silvio Berlusconi’s business empire? Prosecutors hope to find an answer during appeal proceedings that have just begun in Palermo, in a case involving Marcello Dell’Utri, a close associate of Mr Berlusconi and one of the founders of his Forza Italia political party. Mr Dell’Utri, who was returned to parliament again in April’s election, is appealing against a nine-year prison sentence for association with the Mafia that was handed down in December 2004. …

Part of that new evidence is testimony given in 2004 and 2005 during inquiries in Rome into the murder in June 1982 of Roberto Calvi, Banco Ambrosiano’s chairman, just before the bank’s collapse. The prosecutors in Palermo want to ascertain if Mr Calvi, whom they describe as having been a beneficiary of substantial Mafia financing, made any investment in Fininvest in the first half of the 1970s.

The prosecutors note that a senior official from the Bank of Italy, Francesco Giuffrida, who was seconded to help the magistrates in Rome with their investigations, had uncovered various foreign operations. One of these involved Capitalfin International, which set up a subsidiary called Fininvest Limited-Gran Cayman in 1974. Capitalfin International, in which the Banco Ambrosiano group later acquired a big stake, had links to the P2 masonic lodge, of which both Mr Calvi and Mr Berlusconi became members.

[A]fter examining Mr Giuffrida in 2002, the prosecutors drew the court’s attention to a number of attempts that might have been made to intimidate him.

The Economist‘s description of P2 is inadequate.

In the mid 1960s it [P2] only had 14 permanent members, but when Licio Gelli took over in the 1960s and 1970s, he rapidly expanded the membership to over 1000 (most of whom were prominent and elite Italians) within a year. The expansion was almost certainly illegal, as Italian civil servants are generally forbidden from joining secret societies.

In 1976, Masonic authorities withdrew the lodge’s charter and expelled Gelli from Freemasonry.

…involved in Gladio’s strategy of tension – Gladio was the name of the secret “stay-behind” NATO paramilitary organizations. Between 1965 and 1981, it tried to condition the Italian political process through the penetration of persons of confidence to the inside of the magistracy, the Parliament, the army and the press. Beside Italy, P2 was also active in Uruguay, Brazil and especially in Argentina’s “Dirty War”….

The term [“strategy of tension”] was coined in Italy during the trials that followed the 1970s and 1980s terror attacks and murders committed by neofascist terrorists…. The terrorists were backed by intelligence agencies, P2 masonic lodge and Gladio, a NATO secret “stay-behind” army set up to perform guerilla and resistance activities should Italy be successfully invaded by the Soviet bloc (there were equivalent armies in most Western states), which due to its clandestine nature was largely unmonitored and so unchecked by civilian agencies and began to pursue its own right wing, anti-communist agenda using the rather violent means at its disposal, including false flag terrorist attacks. …

[F]ormer CIA agent Richard Brenneke …, claims to have met Licio Gelli in Paris in October 1980, in relationship to the “October surprise.” According to him, William Casey, who would later become head of the CIA but was at that time manager of the Reagan-Bush campaign, was present….

In 2000, a Parliamentary report from the Olive Tree coalition concluded that the strategy of tension followed by Gladio had been supported by the United States….

THE sheer volume of data passing through the SWIFT network daily is mind-boggling: up to 12.7m messages about money transfers, bouncing between more than 7,800 banks and financial firms in over 200 countries. It is the broadest system of its kind for sending financial messages around the world quickly and securely. As one might expect, the data include the names and account numbers of those sending and receiving funds.

Hence this week’s outcry at the revelation that American government agencies have been tracking messages sent via SWIFT for several years….

An industry representative suggests the Americans may have been forced to go to SWIFT after banks turned down their requests for information. “This is a delicate issue,” he says. “There is a degree of cloak and dagger and hush-hush involved.”

James Bovard wrote about this delicate issue for The Baltimore Sun (“Surveillance of financial transactions goes too far“):

A U.N. report on terrorist financing released in May 2002 noted that a “suspicious transaction report” had been filed with the U.S. government over a $69,985 wire transfer that Mohamed Atta, leader of the hijackers, received from the United Arab Emirates. The report noted that “this particular transaction was not noticed quickly enough because the report was just one of a very large number and was not distinguishable from those related to other financial crimes.”

One of the key federal agencies vacuuming the financial information long has snubbed the terrorist threat. As of 2004, the Treasury Department’s Office of Foreign Assets Control had 10 times as many agents assigned to track violators of the U.S. embargo on Cuba as it had tracking Osama bin Laden’s money.

And writing in The American Conservative (“Power of the Pen“) Bovard suggests why little has been done about the widely-reported fraud and waste of the Iraq occupation:

After Congress created an inspector general in late 2003 to look into the Coalition Provisional Authority, Bush decreed, “The CPA IG shall refrain from initiating, carrying out, or completing an audit or investigation, or from issuing a subpoena, which requires access to sensitive operation plans, intelligence matters, counterintelligence matters, ongoing criminal investigations by other administrative units of the Department of Defense related to national security, or other matters the disclosure of which would constitute a serious threat to national security.”