US Entry in WWI Caused WWII 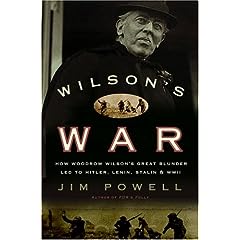 Jim Powell, senior fellow at the Cato Institute and author of Wilson’s War: How Woodrow Wilson’s Great Blunder Led to Hitler, Lenin, Stalin and World War II, explains that it was American intervention, not a lack thereof, that created the circumstances which led to the Second World War and the unbroken chain of U.S. intervention overseas from Woodrow Wilson’s breaking of the stalemate of 1917.

Jim Powell, senior fellow at the Cato Institute, is an expert in the history of liberty. He has lectured in England, Germany, Japan, Argentina and Brazil as well as at Harvard, Stanford and other universities across the United States. He has written for the New York Times, Wall Street Journal, Esquire, Audacity/American Heritage and other publications.

He is the author of several books, including The Triumph of Liberty, A 2,000 Year History Told Through The Lives Of Freedom’s Greatest Champions (Free Press, 2000), FDR’s Folly, How Roosevelt and His New Deal Prolonged the Great Depression (2003), Wilsonâ€™s War, How Woodrow Wilsonâ€™s Great Blunder Led To Hitler, Lenin, Stalin And World War II (2005) and Bully Boy, The Truth About Theodore Rooseveltâ€™s Legacy (2006).