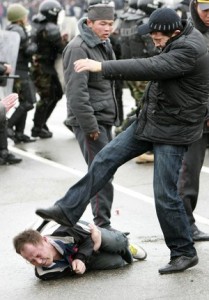 This is a photo of an undercover policeman kicking the head of a Kyrgyz demonstrator this week.

The National Endowment for Democracy and the Bush adminsitration were proud of their role in the uprising that led to the current government taking power in Kyrgyzstan.

Maybe the Endowment’s apologists will claim that the demonstrator is getting a pro-democracy kick in the head.

Kudos to Vladimir Pirogov, the brave Reuters photographer who got this shot. And triple kudos to the Kyrgyz people for stalwartly fighting an oppressive government.

23 thoughts on “The National Endowment for Democracy’s Kyrgyzstan Legacy”