There’s nothing that gets the American can-do spirit going in the morning than a rightwing scribe urging the U.S military to ‘have a fire sale’ (read: destroy) Wikileaks, while invoking Bruce ‘Die Harder’ Willis and CIA ‘friends’ who openly advocate ‘getting’ (read: bagging)Â  Wikileaks founder Julian Assange.

From Jed Babbin at the American Spectator, this morning:

A friend of mine, a more-or-less retired CIA paramilitary operative, sees the solution in characteristically simple terms. “We should go get him,” he said, speaking of Assange.

When my friend says “get him,” he isn’t thinking of lawsuits, but of suppressed pistols, car bombs and such. But as heart-warming as it is to envision Assange surveying his breakfast cereal with a Geiger counter, we shouldn’t deal with him and WikiLeaks that way.

At the risk of abusing the Bard, let’s “Cry havoc, and let slip the geeks of cyberwar.” We need to have a WikiLeaks fire sale.

A “fire sale” (as those who saw Die Hard 4 will remember) is a cyber attack aimed at disabling — even destroying — an adversary’s ability to function. Russia did this to Estonia in 2007 and Israel apparently did this to Syrian radar systems when it attacked the Syrian nuclear site later that year. The elegance of this is that if we can pull off a decisive cyber operation against WikiLeaks, it can and should be done entirely in secret.

And then he ends with:

WikiLeaks should be hit with the cyber equivalent of napalm. Let’s have that fire sale. Burn, baby, burn.

Put aside the pathetic chest-thumping for a second. Babbin fails to explain with any meaningful persuasion why these extrajudicial punishments are in order other than “we have a right to act to protect our secrets. And act we must.” To him, this is tantamount to everything, even the U.S Constitution. He proves this by blustering about the whistleblowers who exposed the government’s illegal spying on Americans under the Bush Administration (he says this, by the way, while the so-called conservative website he is writing for exploits and perverts the images of Ben Franklin and minutemen icons in the ad bars alongside his column):

Over the past decade, America has been unwilling to defend its secrets and punish leakers. Under Bush Attorney General Alberto Gonzales, fear of media reaction prevented the investigation of some of the most damaging leaks in history, ranging from the New York Times‘s publication of the NSA Terrorist Surveillance Program to the Washington Post‘s publication of the CIA’s secret prisons for terrorists. The people who leaked those secrets were left unpunished by Gonzales’s Justice Department refusal to subpoena the reporters and force disclosure of their sources.

Note to Babbin: Maybe they were left ‘unpunished’ (though we can hardly call losing one’s career and facing criminal indictment ‘unpunished’) because these “leakers” and journalists were doing their jobs — like serving The People — while the NSA and CIA were crapping all over the Constitution and soiling the reputation and honor of the United States all over the globe for decades to come?

But smearing the Constitution seems little bother to Babbin, who sets the Chinese Standard for the Pentagon, advocating a full-throated war cry and a STRATCOM offensive against Wikileaks and any like web operation, saying it is “not impossible,” though he does not say how it can be done. Noisome details.

The real punchline here is not in Babbin’s supercilious screed, but in the comments, which began posting immediately. Gasbags sitting with their morning joe, contemplating all manner of steroidal reaction. John McClane-meets-Slappy-the-Keystroker, if you will:

Since many Afghans are now at risk because of Wikileaks, why not have one of the tribal immams in Afghanistan declare a fatwa on Mr. Assange? This will make his life very difficult and would be a fitting punishment for his crime. Any why not place that PFC who turned traitor and gave away these secrets in front of a firing squad? This way, the next traitor may not be so brave.

How about giving every such anonymous commenter the gun with which to fire on said PFC and ask him to pull the trigger him or herself. Bruce would be proud. Better yet, round up the best of them and they can form the Best Hit Squad Ever: 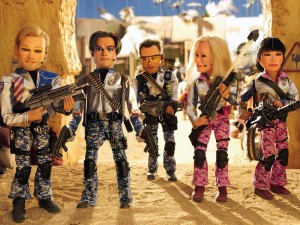