Sarah Palin will not run for president in 2012. Though Andrew Sullivan can be expected to persist in his quest to deploy U.N. inspectors to Palin’s uterus, the nation’s less-cracked Obamatons will have to build a new uber-bogeyman to juxtapose with the Lightworker. 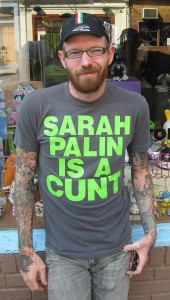 It’s not fair. Why, Andrew just blogged his little heart out about evil Sarah a few hours ago! And what did he have to say about the man who just executed a U.S. citizen without even the pretense of due process?

Obama has ended torture and pursued a real war, not an ideological spectacle. He has destroyed almost all of al Qaeda of 9/11 (if Zawahiri is taken out, no one is left), obliterated its ranks in Afghanistan and Pakistan, found and killed bin Laden, in a daring raid pushed relentlessly by the president alone, capturing alongside a trove of intelligence, procured as a consequence of courage and tenacity rather than cowardice and torture. …

Back in 2001, I wondered if Bush would be the president to win this war, while hoping he would. I wondered if his errors might lead to a successor who learned from them. That hope has now been fulfilled – more swiftly and decisively than I once dared to dream about.

14 thoughts on “A Dark Day for Democrats”