From AFP over the weekend:

The United Nations has called on Israel to immediately halt the destruction of Palestinian homes in the West Bank after reporting a dramatic rise in demolitions in the past year.

Israeli forces destroyed 622 Palestinian homes in the West Bank in 2011, “forcibly displacing” almost 1,100 people, over half of them children, according to a UN Office for the Coordination of Humanitarian Affairs report.

This is, of course, nothing new. The UN repeatedly recognizes many of Israel’s actions as unacceptable or illegal. The blockade on Gaza is another frequent one, but the forcible displacement of Palestinians in the West Bank is probably the most prevalent. The Israeli Committee Against House Demolitions (ICAHD), submitted a report in September to three of the UN’s Special Rapporteurs claiming that Israel’s actions in East Jerusalem violate international law, may constitute a war crime, and asked for an investigation into these practices. It says Israel is “forcing the migration process on the basis of ethnicity – which violates international law, and is possibly a war crime.”

As is so common when talking about human rights abuses with a bird’s eye view, the true nature of what it means to destroy Palestinian homes, build new settlements, and prevent them from building their own homes is obscured and indistinct. Which brings us to another incident that occurred over the weekend: a Palestinian man was building a house in the occupied West Bank in violation of Israeli rules of domination. As Philip Weiss explained it: “The man refused to move. The Israeli army drove a tractor over his legs. The tractor belonged to the Palestinians. The Israeli army had seized it. The man was hospitalized.” 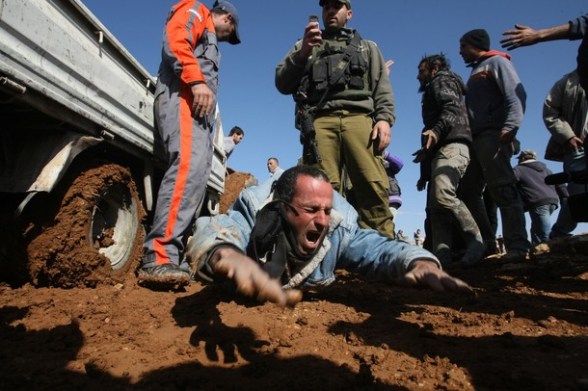 There is a single reason this kind of daily abuse and illegality continues, and it doesn’t have anything to do with Israeli intransigence. That single factor is American support.