From Steve Clemons at the Atlantic:

A Republican, numbers-compulsive defense wonk at the Center for Defense Information, Winslow Wheeler, has published a great summary of what America’s defense budget ‘really’ is.

Wheeler offers a chart of the budget figures for both 2012 and 2013 — starting with what is called the “DOD Base Budget (Discretionary)”.  He then adds line items from different accounts throughout other parts of the budget that really should be part of what is considered defense and security — including the odd factoid that the Department of Defense and Office of Management and Budget (OMB) issue different figures of what the DOD Base Budget really is — with the Pentagon shorting what it gives the media by about $6 billion. 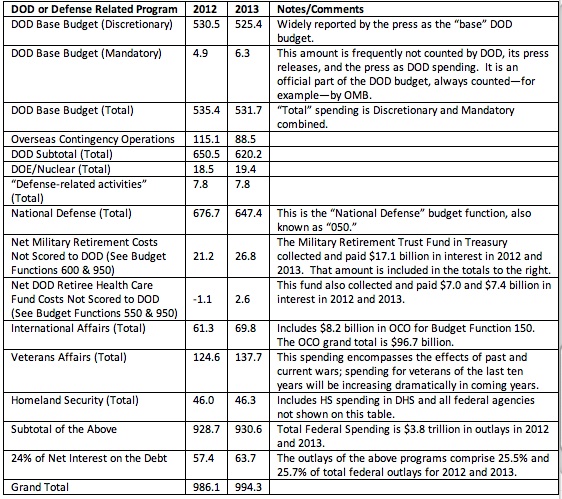 Using the more common, lower figures like the $728 billion military budget the U.S. allocated in 2010, Veronique de Rugy recently wrote that’s “about 45 percent of the world’s $1.6 trillion total, more than the next 14 largest military spenders combined and nearly six times more than the next biggest spender, China.” Using Wheelers numbers those ratios are even more jarring.

Imagine if a fraction of that $1 trillion dollars was given to you to spend or invest how you please. Think you could do it more productively? Well, imagine that many, many times over – if this money being shoveled into the pockets of rent-seekers in the military industrial complex and wasted abroad on killing innocent people was never taken from taxpayers to begin with.

10 thoughts on “The Real US Military Budget: $1 Trillion”