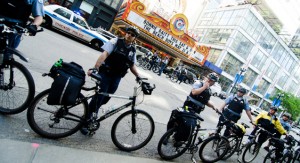 TruthOut Assistant Editor Yana Kunichoff has just filed an alarming report titled, “NATO Protesters Held Without Charge After Raid as Chicago Steps Up Police Activities,” showing that in the lead-up to the NATO Summit protests upcoming this weekend, the Chicago Police Department (CPD) raided the homes of nine Occupy Chicago activist leaders on Wednesday. Some of the activists were held in custody for nearly 24 hours without charge, with only four of them having been released at the time of the publishing of her story.

“I’d like to stress that we have done nothing wrong,” Zoe Sigman, an Occupy Chicago activist told Kunichoff, whose home was raided. “We have been planning to protest NATO and there is nothing illegal about expressing our feelings about a war machine. Now we’re being treated as mere criminals. As if we’re part of an organized crime that they’re trying to take down. Who knows what they’re going to pin on us. We’re terrified.”

Occupy Chicago, in a press release, says that the CPD’s behavior is the hallmark of a “militarized police state.”

Occupy Chicago demands the immediate release of the peaceful protesters terrorized by the Chicago Police Department in Wednesday nights raid. We are getting a taste here in Chicago of what it’s like to live in a militarized police state, with non-violent demonstrators targeted for expressing their First Amendment Rights and for standing up against the NATO war machine.

Kunichoff went on to explain that the preemptive arrests and arraignments were but the “tip of the iceberg” of what’s been brewing in the Windy City, noting that a local ABC News affiliate had reported yesterday that during a protest on environmental issues, “Dozens of uniformed Chicago police stood guard nearby, though they made no arrests. But around the corner a couple blocks away back-ups were apparently standing by. Inside 15 unmarked passenger vans they were dressed in black uniforms with riot gear.”

The takeaway, as is obvious: the tools of imperial repression have made their way home for those protesting the U.S. Empire in Chicago this weekend at the NATO Summit.

As FireDogLake‘s Kevin Gosztola put it,

For all the worries about protesters descending upon Chicago to create violence, it certainly seems like the people of Chicago should be more worried about NATO occupying Chicago. NATO is being used as a pretext to suppress dissent and go after activists. The police squads are more likely to violate someone than a protester raising his or her fist in the air while wearing a mask. In fact, that person wearing that mask just might be a police officer, federal agent, or some kind of hired agent provocateur.

Stay tuned for more coverage from the front lines in Chicago forthcoming on the Antiwar.com Blog.