Lesson one from Cato’s Julian Sanchez is that “Government surveillance is now almost entirely off the books.” The old way of tallying how many times the national security state attempts to spy on citizens is not taking into account the digital internet age. He explains:

…Verizon reported fielding more than 88,000 requests for data in 2006 alone. These would have ranged from traditional wiretaps, to demands for stored text messages and photos, to “pen registers” revealing a target’s calling patterns, to location tracking orders, to simple requests for a subscriber’s address or billing information. Google, which is virtually unique among major Internet services in voluntarily disclosing this sort of information, fielded 12,271 government requests for data, and complied with 11,412 of them. In other words, just one large company reports far more demands for user information than all the wiretaps issued last year combined. And again, that is without even factoring in the vast amount of intelligence surveillance that occurs each year: the thousands of FISA wiretaps, the tens of thousands of National Security Letters (which Google is forbidden to include in its public count) and the uncountably vast quantities of data vacuumed up by the NSA. At what point does the wiretap report, with its minuscule piece of the larger surveillance picture, just become a ridiculous, irrelevant formality? 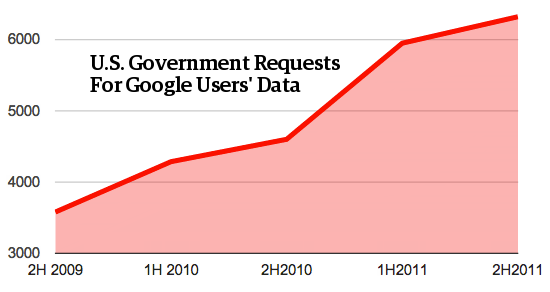 But that is only what we can gather from publicly available information. We know that it costs the government well over $11 billion annually just to keep its spying, lying, and abuse a secret.

The worst of government secrecy has occurred under the Obama administration, which has hailed itself as the most transparent administration ever. According to the Information Security Oversight Office (ISOO), the government made a whopping 76,795,945 classification decisions in 2010, an increase of more than 40% from 2009. Document reviews conducted by ISOO in 2009 discovered violations of classification rules in 65% of the documents examined, with several agencies posting error rates of more than 90%.

It’s important to understand where this kind of government comes from. We don’t have an appallingly secret government as a result of farm subsidies or our ballooning entitlement system. The state does not submerge itself in the shadows and hide the truth from its own citizens as a result of haggling over income tax policy or the definition of marriage. Washington doesn’t choose to spy on its own citizens in order to protect against individual mandate dissidents. We get this kind of government because of its penchant for war and its resulting national security state. Every great leap into secrecy and spying on US citizens has been achieved under the rubric of protecting “us” from “enemies,” foreign and domestic.

9 thoughts on “War is the Health of Government Spying & Secrecy”