Reading through, as I sometimes do, the great collection of essays in We Who Dared to Say No to War: American Antiwar Writing From 1812 to Now, edited by Murray Polner and Thomas E. Woods, I came across a piece by William Jennings Bryan. Resigning as 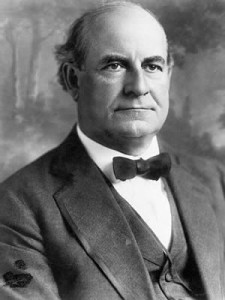 Wilson’s secretary of state in 1915, Bryan had opposed the US occupation of the Philippines, a conflict in which US soldiers committed sadistic atrocities and which caused hundreds of thousands of civilian casualties. In his essay “The Paralyzing Influence of Imperialism” he writes his own version of Eisenhower’s famous farewell address, only 61 years early.

If we have an imperial policy we must have a great standing army as its natural and necessary complement. The spirit which will justify the forcible annexation of the Philippine Islands will justify the seizure of other islands and the domination of other people, and with wars of conquest we can expect a certain, if not rapid, growth of our military establishment.

…A large standing army is not only a pecuniary burden to the people and, if accompanied by compulsory service, a constant source of irritation but it is even a menace to a republican form of government. The army is the personification of force, and militarism will inevitably change the ideals of the people and turn the thoughts of our young men from the arts of peace to the science of war. The government which relies for its defense upon its citizens is more likely to be just than one which has at call a large body of professional soldiers.

The late 1800s and early 1900s was really a time of transition for America towards overseas bases and military empire. And today, that empire of bases continues to grow.