For several months now, Foreign Affairs magazine has featured something of a back-and-forth debate about Iran, its nuclear program, and war. In the January/February edition, Matthew Kroenig, Georgetown professor and fellow at the Council on Foreign Relations wrote a piece, the title of which said it all: “Time to Attack Iran.”

In response, Colin Kahl, who was Deputy Assistant Secretary of Defense of the Middle East until December, wrote his own piece entitled “Not Time to Attack Iran.” Kahl saw a preventive strike on Iran as unjustified and counterproductive, preferring instead to heavily sanction Iran’s economy, continue to provocatively threaten Iran with military encirclement, while engaging in intense negotiations for some sort of political settlement which would be viable if both sides were willing to reciprocate valuable concessions. 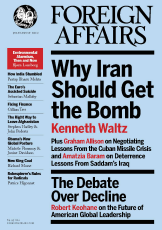 In the latest issue of Foreign Affairs, Kenneth N. Waltz, a renowned international relations theorist, argued another take with “Why Iran Should Get the Bomb.” He argued that Iran’s legitimate threat perception in the context of US and Israeli posturing is incentivizing the leadership to go for nuclear weapons, and that this would be a good thing for the stability of the region. There is an asymmetry in the balance of power in the Middle East, Waltz argued, since Israel has hundreds of warheads and doesn’t need to answer for them thanks to US support. Most importantly, he argued that new nuclear states typically become less bellicose and claimed they would not use the deterrence it would afford them to be more aggressive with proxies like Hezbollah. “In fact, by reducing imbalances in military power, new nuclear states generally produce more regional and international stability, not less,” Waltz wrote.

Now Kahl has swung back with a response to Waltz (Waltz rebuts Kahl’s rebuttal at the bottom of the link).

Waltz correctly notes that Iran’s leaders, despite their fanatical rhetoric, are fundamentally rational. Because Iran’s leadership is not suicidal, it is highly unlikely that a nuclear-armed Iran would deliberately use a nuclear device or transfer one to terrorists. Yet even though the Islamic Republic is rational, it is still dangerous, and it is likely to become even more so if it develops nuclear weapons.

States are dangerous; that’s the nature of their inherent violence. The relevant question is whether Iran would be more aggressive than it is now. Or, perhaps more to the point, more aggressive than other states which have achieved nuclear weapons. As Waltz says, “Israel’s regional nuclear monopoly…has long fueled instability in the Middle East.” Israel has been involved in, and been the cause of several devastating wars and is in violation of a long list of international laws and UN resolutions. Yet nobody in Washington considered preventive war on Israel as a better alternative.

Another example to consider is Pakistan. Kahl disputes what Waltz says is the case, that Pakistan’s conflict with India has calmed ever since both states got nuclear weapons. There are still skirmishes between the two, but they are apparently less explosive. But Pakistan has also played a bit of a double game with Washington regarding insurgent groups and cross border attacks into Afghanistan. This is certainly not desirable from Washington’s point of view, but few argued for bombing and regime change in Pakistan to prevent them from getting nukes, probably because it was a much worse alternative.

This is not to say that Iran should get the bomb, but merely to put it in the appropriate context: war is not a desirable alternative to a nuclear armed Iran. In a cost benefit analysis, war as a preventive measure is far worse than a nuclear Iran, especially with all the stabilizing effects it is likely to bring.

A nuclear-armed Iran, believing that it possessed a powerful deterrent and could thus commit violence abroad with near impunity, might also increase the frequency and scale of the terrorist attacks against U.S. and Israeli targets carried out by Hezbollah and the Quds Force, the covert operations wing of Iran’s elite Islamic Revolutionary Guard Corps. And a bolder Iran might increase the number of Revolutionary Guard forces it deployed to Lebanon, allow its navy to engage in more frequent shows of force in the Mediterranean, and assert itself more aggressively in the Persian Gulf and the Strait of Hormuz.

Unfortunately, these predictions take Iran’s actions to be in a vacuum. Again, Iran is operating out of a perception of threat, and this explains its postures. Washington could easily alter its policies to incentivize Iran away from even attaining a nuclear deterrent (or, once it has the deterrent, away from bellicosity and increased activity through proxies). But it chooses not to.

I think both forces would be likely to influence a nuclear Iran; that is, both Waltz’s calming effects and Kahl’s increased bellicosity. People tend to forget in analyses like these that the country in question is not a monolith. What is also easy to forget in these debates is the reality that  there is no known weaponization going on in Iran, that US intelligence has concluded that Iran has not decided to go for nuclear weapons, and that Tehran’s actual strategy is rather explicitly to not attain nuclear weapons. These annoying little facts can get in the way of a good establishmentarian debate though.

32 thoughts on “The Elite Debate on Iran”