Former CIA analyst and Antiwar.com contributor Ray McGovern spoke with Business Insider about Israeli Prime Minister Benjamin Netanyahu’s hankering to bomb Iran and why “delaying Iran’s nuclear capabilities is not the primary concern of a military strike, but simply the pretext.”

“The Israelis want to pretend the Iranians are building up their nuclear capabilities, want to zap them between now and November 6, and the chances are at least even that they will try to do that thinking the U.S. will come in with both feet,” McGovern told us. 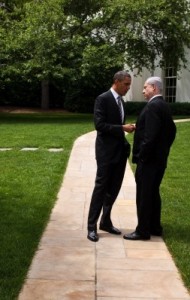 McGovern thinks that “Israel does not fear a nuclear weapon in Iran’s hands” because Israel already has a nuclear arsenal and the threat of Iran having a couple of nukes “would not be all that credible except in a limited, deterrent way.”

That deterrent would be important, however, because “since 1967 the Israelis have been able to pretty much do whatever they want in that area” and a nuclear Iran would bring a “different strategic situation because, for the first time, Israel would have to look over their shoulder.”

So even though Israel’s leaders don’t truly fear imminent nuclear annihilation, McGovern says they “would like to end any possibility, however remote, that anytime soon Iran could have that kind of very minimal deterrent capability.”

McGovern believes that Israel’s primary goal is to “have Iran bloodied the same way we did to Iraq” so that Iran “would no longer be able to support Hamas and Hezbollah in Gaza, Lebanon, and elsewhere.”

And the reason Nov. 6 is an important date, McGovern wrote in a recent article, is that “a second-term Obama would feel much freer not to commit U.S. forces on Israel’s side” and “might use U.S. leverage to force Israeli concessions on thorny issues relating to Palestine.”

While some view an Israeli strike as unlikely, due especially to strong opposition from the Israeli defense establishment, McGovern sees Netanyahu as having significant leverage over Obama at least until the November elections. “Netanyahu feels, with good reason, that he’s got Obama in a corner for these next three months,” he says. “If he’s right about Obama jumping in with both feet — and I think Obama would do that — even though Israeli generals are advising that it could be a disaster, [then] Netanyahu is willing to try it.”