“Since the disappearance of the Soviet Union,” writes James Dobbins at RAND Corp., “China has become America’s default adversary, the power against which the United States measures itself militarily, at least when there is no more proximate enemy in sight.”

I know what you’re thinking: What has China ever done to us? What villainous offense have they committed to our well-being or our interests? It can’t possibly be the case that China is our “default adversary” just because the Soviet Union is gone, can it? 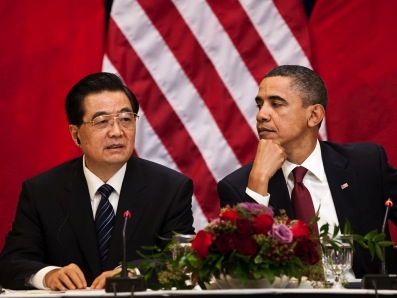 Well, yes it can. As Colin Powell, former Secretary of State and retired four-star general, said about the fall of the Soviet Union, Washington was remorseful that we “lost our best enemy.” The system – the “whole structure,” Powell explained, “depended on there being a Soviet Union that might attack us.” He said Mikhail Gorbachev sat across the table from him at the time and said apologetically “Ah, General, I’m sorry, you’ll have to find a new enemy.”

When people in Washington and their surrogates in the mass media punditry crow about our other trumped up threat, they at least have a laundry list of alleged transgressions. You know the list: they support terrorism, they want to wipe Israel off the map, they’re secretly building nuclear weapons, they killed US soldiers invading and occupying neighboring Iraq, etc. With China, there is no such list. China’s mere existence as anything other than a vassal state is the major transgression. As James Holmes has written in the National Interest, China “presents the sternest ‘anti-access’ challenge of any prospective antagonist.” In other words, they resist US interventionism and military presence. China is gaining power and influence, which ought to be solely American prerogatives, as far as Washington is concerned.

This is the reasoning behind President Obama’s strategic shift into Asia-Pacific, announced by the administration last year. This so-called ‘Asia pivot’ is an aggressive policy that involves surging American military presence throughout the region – in the Philippines, Japan, Australia, Guam, South Korea, Singapore, etc. – and backing basically all of China’s rivals.

More than that, the Pentagon is drawing up new plans to prepare for an air and sea war in Asia. “As part of the Air-Sea Battle concept,” reports Military.com, the US is refurbishing old WWII bases, looking “to disperse its air forces stationed at its handful of major bases in the western Pacific in the event of a major conflict with China.”

The idea is to have enough US bases peppered throughout the region so that China would be too surrounded to safely attack. “Doing so would make it more difficult for China to wipe out entire squadrons sitting on the ground with surprise attacks from its long range ballistic missiles.”

Chinese officials have not appreciated this unprovoked bellicosity. In May the Chinese Defense Ministry accused the Pentagon of hyping a Chinese military threat out of thin air. Others have said these Pentagon moves could start an arms race. “If the U.S. military develops Air-Sea Battle to deal with the [People’s Liberation Army], the PLA will be forced to develop anti-Air-Sea Battle,” one officer, Col. Gaoyue Fan, said last year in a debate sponsored by the Center for Strategic and International Studies.

“While China’s overall military capabilities will not equal those of the United States anytime soon,” Dobbins puzzlingly warns, “it will more quickly achieve local superiority in its immediate neighborhood, first in and around Taiwan and then at somewhat greater distances.”

In consequence, the direct defense of contested assets in that region will become progressively more difficult, eventually approaching impossible. The United States will therefore become increasingly dependent on escalatory options for defense and retaliatory capabilities for deterrence. American nuclear superiority is not likely to be much help in this regard, both because China will retain a second-strike capability and because the issues at stake in most potential crises are not of vital consequence to the United States.

So, even though China’s “local superiority” has effects that “are not of vital consequence to the United States,” it’s important that we rely on “escalatory” military options to prevent it from happening? Dobbins then suggests strategies, which are already being carried out:

One means of improving the prospects for direct defense and reducing the risk of escalation is for the United States to enable the capabilities and buttress the resolve of China’s neighbors. Such a strategy should not be—or be seen—as a U.S. attempt to encircle or align the region against China, lest it produce greater Chinese hostility.

Except that it is producing greater hostility from China. A recent report from the CSIS predicted that next year “could see a shift in Chinese foreign policy based on the new leadership’s judgment that it must respond to a US strategy that seeks to prevent China’s reemergence as a great power.”

“Signs of a potential harsh reaction are already detectable,” the report said. “The US Asia pivot has triggered an outpouring of anti-American sentiment in China that will increase pressure on China’s incoming leadership to stand up to the United States. Nationalistic voices are calling for military countermeasures to the bolstering of America’s military posture in the region and the new US defense strategic guidelines.”

There is no reason to pick a fight with China, whether it induces conventional warfare or a new Cold War. China hasn’t harmed our interests or our security. Washington just wants to flex its muscles and prove that it still represents the greatest mafia among all the world’s mafias.

71 thoughts on “Inventing the Chinese Threat”