This recent CSIS report is a stern warning that America needs to draw down the Empire, lest bankruptcy and collapse do us in first. It focuses on five trends that necessitate American decline and roll-back: “disappearing finances; rising alternative power centers; declining US military predominance; lack of efficacy of key non-military instruments of power; and reduced domestic patience for global adventures.” 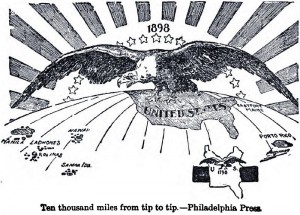 The very definition of grand strategy is holding ends and means in balance to promote the security and interests of the state. Yet, the post-war US approach to strategy is rapidly becoming insolvent and unsustainable – not only because Washington can no longer afford it but also, crucially, because it presumes an American relationship with friends, allies, and rivals that is the hallmark of a bygone era. If Washington continues to cling to its existing role on the premise that the international order depends upon it, the result will be increasing resistance, economic ruin, and strategic failure.

The Obama administration has explicitly shifted away from reliance on massive land-wars and nation-building experiments – at least relative to the Bush administration – and toward drones and elite Special Operations teams being secretly deployed wherever and whenever. But we in fact do not see any sort of structural roll-back.

Obama is still pursuing expansion and impulsive interventionism: from the opportunistic (and unconstitutional) war in Libya; to laying the groundwork for another decade of occupation in Afghanistan; the never-ending drug war in Latin America; and flagrant, 19th-century-style military imperialism in Asia-Pacific.

Billions continue to be squandered on on wasteful superfluous weapons technology, bloated salaries and benefits plans, and expensive peacetime operating costs for the 900-plus military bases in 130-plus countries around the world, all of which are being petulantly clenched.

I found the public opinion section of the report notable:

A 2009 poll by the Pew Research Center found that 49 percent of those surveyed, an all-time record, said that the United States should “mind his own business internationally and let other countries get along the best they can on their own.” That number jumped from 30 percent in 2002. Those who favor a powerful American leadership role in the world have also declined in Gallup polling. For example, the percentage fell from 75 and 2009 to 66 in mid-2011, while the percentage advocating a far more minimal US role grew from 23 percent to 32 percent. Over 40 percent of Americans now say the country spends too much on defense compared with less than a quarter who say it spends too little.

All of that makes Ron Paul’s incredible surge in popularity since 2008 seem like it was all inevitable in the end.

See here for why the worry about “American decline” chiefly concerns the ruthless foreign policy elite, but would be immensely beneficial for almost everyone else.

45 thoughts on “Wishing Away the Coming Implosion of American Empire”