Nobody thinks the Afghan government puts Afghanistan on a path to independence, stability, and good governance. Well, almost nobody. 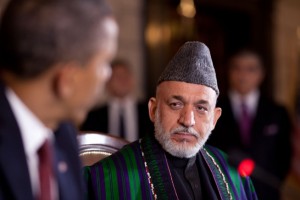 According to the latest polls, an astonishing 40 percent of Americans think the war in Afghanistan is going “very well” or “fairly well.” And while 60 percent say America “should not be involved” in Afghanistan, 31 percent think we’re doing the right thing.

Most of the political class, and nearly all of the Washington, DC wonkers, however, believe what should be obvious to well over 60 percent of Americans: the war is a failure and the Afghan government and its security forces warrant zero confidence by every observable metric. A report by the International Crisis Group earlier this month found that the Afghan government “could collapse” after the 2014 transition and the Associated Press reported last week that “a decisive end seems nowhere in sight,” while noting the enduring Taliban insurgency, the failure of a negotiated settlement, the weakness of the US-backed Kabul government, and Washington’s plans to keep tens of thousands of troops in Afghanistan well beyond the much-cited “withdrawal date” of 2014. “We are probably headed for stalemate in 2014,” says Stephen Biddle, a George Washington University professor who has advised US commanders in Afghanistan and Iraq.

So why the lingering support by sizable minorities?

In a word: propaganda. At Foreign Policy, Frances Z. Brown of the Council on Foreign Relations thinks the naive faith in the Afghan government, the Obama administration’s key to “success” in Afghanistan, is because few people have a systematic understanding of the reality on the ground due to (1) a reliance on liars in the US government and military, and (2) their distraction by anecdotal soundbites, and the inability or unwillingness to think beyond that. Brown writes:

In an era of budget constraints, military and civilian organizations in Afghanistan are pressured to demonstrate results quickly-and so they direct the unremitting stream of high-level visitors and influential thinkers to Afghanistan’s most impressive cases. As a second explanation, our sound-bite culture places a premium on personal testimonials, and so peppering public communication with colorful narratives rather than tedious data is often viewed as more authentic or engaging.

This reminds me of Michael Hastings blockbuster reporting in Rolling Stone last year, when he revealed that “the US Army illegally ordered a team of soldiers specializing in ‘psychological operations’ to manipulate visiting American senators into providing more troops and funding for the war.”

Lieutenant Colonel Daniel L. Davis, who bravely came out publicly last year to denounce the US military leadership as a bunch of propagandists, said that “Our current military leadership is so distorting the information it releases that the deterioration of the situation and the failing nature of our efforts is shielded from the American public (and Congress), and replaced instead with explicit statements that all is going according to plan.” He said his deployments to Afghanistan revealed to him a reality that “bore no resemblance to rosy official statements by U.S. military leaders about conditions on the ground.”

And as for the second part of Brown’s explanation, I turn it over to Noam Chomsky:

The propaganda effort on Afghanistan has been going on for more than a decade now, and the fact that 53 percent of Americans think its going “not too well” or “not at all well” means perhaps the batteries are running out. But it still manages to keep sizable minorities from opposing it and to keep virtually the entire American public passive, docile, and disinterested.

17 thoughts on “Why Pro-War Propaganda on Afghanistan Still Works”