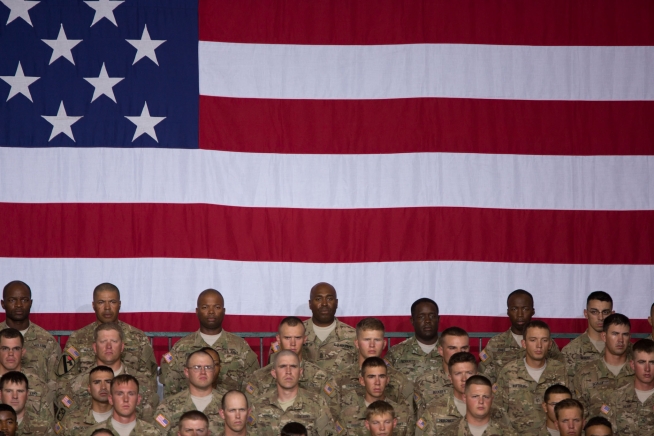 The election is today. Invariably thrown around at these times are platitudes about our great nation and the people’s decision giving divine mandate to the victor. In the fog of this rhetoric it’s difficult to remember that the election is really about ushering in four more years of power for a coalition with already far too much influence over the direction of the country. Whoever wins, the victory won’t be for the American people, but rather for the state and its allied rent-seekers.

Understanding this difference is most important where it is most often forgotten: in the realm of foreign policy. “Under democracy, the rulers constantly urge the subjects to identify themselves with the state, to forget that “they” (the rulers) are not “we” (the ruled) and even to believe that the two groups are one and the same,” economist Robert Higgs writes in the introduction to his latest book, Delusions of power.

Every day in academia, in media, in the blogosphere, and around dinner tables Americans talk about foreign policy and almost always articulate it in terms that presume this false equivalence Higgs talks about.  Americans are duped into thinking that when the rulers talk about facing national security threats, they are literally talking about keeping the population safe from foreign threats to their lives and immediate security.

Putting more than a minute’s thought into this is enough to penetrate its underlying fiction. Does any body really believe that Jon and Jane Doe in Springfield America-town were actually saved from destruction and destitution by a virtually 15-year-long war in Vietnam which killed almost 60,000 US soldiers and millions of Vietnamese?

“In this country, the powers that be have unfortunately achieved considerable success in indoctrinating the public with this myth,” Higgs writes, “which helps explain why so many people have handed over themselves and their children to serve as cannon fodder in the rulers’ endless, unnecessary wars.”

The secret wars America fights are even more enlightening in this respect, because these are the wars that the national security state is determined to fight, but knows the motivations can’t be packaged and sold to the American people to make them actually believe their safety is at risk. Who can really say that Jon and Jane were personally threatened when the CIA decided to overthrow the democratically elected government of Iran in 1953 and install a more preferred dictator? Who in America would otherwise have been existentially threatened if Reagan had not helped foment a savage civil war and support massive human rights abuses by proxy to undermine the Sandinistas in Nicaragua?

Consider the Carter Doctrine – literally the cornerstone of US foreign policy in the Middle East, which has not changed fundamentally since its induction in Carter’s State of the Union speech in January 1980. In that speech, Carter uttered the fateful words that would inform Washington’s perception of the Middle East for decades to come: “An attempt by any outside force to gain control of the Persian Gulf region will be regarded as an assault on the vital interests of the United States of America, and such an assault will be repelled by any means necessary, including military force.”

Now, is maintaing US “control of the Persian Gulf region” by force and coercion really indispensable for the safety of Jon and Jane? Sure, they need oil and gas to heat their homes and drive to work, but why should the government need to “secure” that particular commodity?

It is not for the sake of Jon and Jane that the United States Government establishes military bases, props up obedient dictatorships, and goes to war in the Middle East. They are not safer and their wallets are emptier because of these policies. It is for the sake of the supremacy of the government – the rulers – that these policies are imposed. Iran, the greatest bogeyman in the establishment’s lexicon, threatens their interests, their dominance in the most strategically important region in the world. Jon and Jane, quite obviously, have nothing to fear from Iran.

“National security interests” are just that: interests of the national security state, not of the people. Just being able to recognize this can change one’s entire understanding of war, politics, elections, and the real threat to their security.