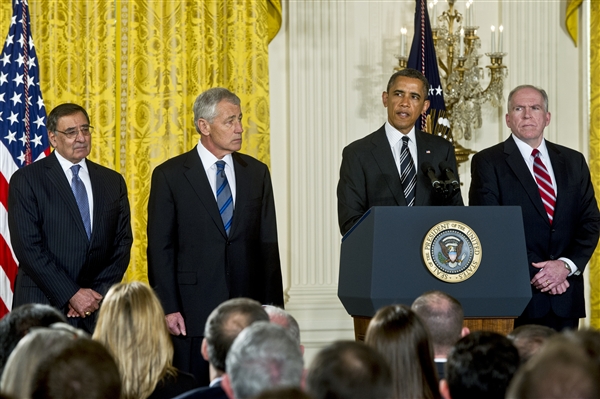 Much was supposedly riding on Chuck Schumer’s (D-NY) decision about whether to support Obama’s nomination for Secretary of Defense, Chuck Hagel. Schumer is a big supporter of Israel and a shameless foreign policy hawk, and Hagel’s past positions – like, being willing to criticize Israel and advocating diplomacy over belligerence on Iran – deeply troubled him.

So the two Chucks decided to meet, so that both could be reassured of the other’s political good faith. How it apparently turned out is that Hagel flipped and flopped like a fish out of water. The Los Angeles Times explains:

According to Schumer, Hagel promised to make planning military options against Iran his “top priority,” if confirmed, disavowed a past call to open negotiations with the Palestinian militant group Hamas, and said further unilateral U.S. sanctions against Iran may be necessary — positions that are seemingly at odds with stances the former Nebraska lawmaker has previously taken.

Hagel also told Schumer he regretted once using the term “Jewish lobby” to refer to Israel supporters in Washington and promised to work for “on-time delivery” of F-35 fighters and other military equipment to Israel, the statement said.

…”I know some will question whether Senator Hagel’s assurances are merely attempts to quiet critics as he seeks confirmation to this critical post. But I don’t think so. Senator Hagel realizes the situation in the Middle East has changed, with Israel in a dramatically more endangered position than it was even five years ago. His views are genuine, and reflect this new reality,” Schumer said.

I wrote last week that it was unlikely Hagel immediately abandoned his political views once Obama nominated him. But this explicit disavowal of almost every one of his positions is just foul. Either Hagel is willing to verbally placate nearly anyone for his own political career, or he is actually shifting his views for the sake of his political career. I’m not sure which is worse.

34 thoughts on “Present-Hagel Disavows Past-Hagel: Is he Politicking or Unprincipled?”