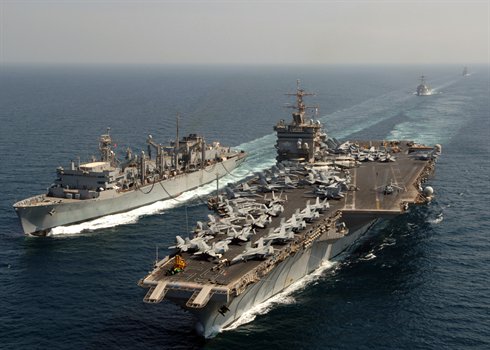 Congressman Mike Coffman, Republican from Colorado, has made public a broad plan for where exactly to make the approximately $500 billion in cuts mandated by the sequestration deal. You know, the cuts that almost every notable official in the White House, Pentagon, and Congress claims are too drastic and would be devastating to US national security. Coffman, no dove, makes targeting areas of waste look easy:

1. $150 billion. Require annual reductions in defense spending by the Department of Defense through reducing programs and activities which do not contribute significantly to military capability, allowing leaders of Defense to use their expertise to combat wasteful earmarks and respond to changing environments.

2. $100 billion. Adopt “sea swap” policies for cruisers, destroyers, and amphibious ships by flying crews out to ships instead of changing crews at home ports.

3. $53 billion. Use local civilian contractors instead of military personnel to perform commercial-type activities at military bases.

5. $52 billion. Reduce spending for the Pentagon’s “Other Procurement,” which covers non-major equipment replacement. Our overseas deployments are ramping down, and everyday equipment will last longer now than in wartime.

6. $36.7 billion. Cut the number of Department of Defense civilian bureaucrat positions through attrition.

8. $15 billion. Cut the number of consultants and contractors at headquarters.

10. $7.1 billion. Consolidate the management of retail stores on military bases.

15. $800 million. Reduce the top-heavy number of Pentagon generals and admirals.

Most of the defense budget buys exorbitantly priced weapons systems that are obsolete in the type of 21st century warfare that Washington expects to wage. They want ’em just to keep defense corporations filthy rich and to continue to be able to “project power” around the world.

Still, we have President Obama saying just yesterday that “the threat of these cuts has forced the Navy to delay an aircraft carrier that was supposed to deploy to the Persian Gulf.”

As Gopal Ratnam reports at Bloomberg News, “the defense budget contains hundreds of billions of dollars for new generations of aircraft carriers and stealth fighters, tanks that even the Army says it doesn’t need and combat vehicles too heavy to maneuver in desert sands or cross most bridges in Asia, Africa or the Middle East.”

And yet our overlords in Washington say nothing can be cut.

17 thoughts on “How Are We Supposed to Rule the World With One Less Warship in the Persian Gulf!?”