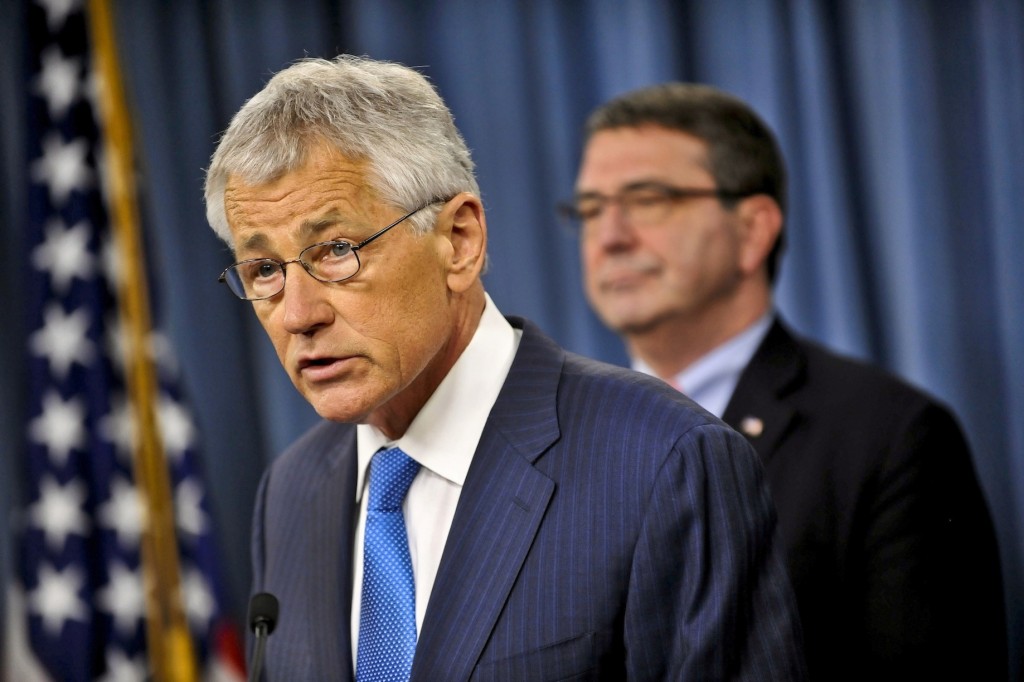 Less than a week. That’s how long it took for Hagel to start toeing the Obama line on sequestration, contradicting his now infamous prior statement that the Pentagon is “bloated” and “needs to be pared down.”

Antiwar voices that got excited over Hagel’s nomination pointed to these quotations favorably. And political commentators suggested President Obama’s rationale for nominating the Republican Chuck Hagel to be Defense Secretary was strategic: he could safely advocate and implement seemingly inevitable cuts to military budgets.

On Wednesday of last week, the day he was sworn in, Hagel told an audience in a speech at the Pentagon that the sequester “is a reality,” and that, “We need to figure this out.”

But now, as The Washington Times reports, Hagel is “warn[ing] against cuts.” According to the Defense Department’s website, Hagel warned that sequestration “puts at risk our ability to effectively fulfill all of our missions.” He urged Congress to come up with “a plan that leads to an end to sequestration.”

“Leadership in the Pentagon … [has] two serious concerns: first, the abrupt and arbitrary cuts imposed by sequester; and second, the lack of budget management flexibility that we now face under the current continuing resolution,” Hagel said.

The department has already had to cut funding for readiness, he said. “As sequester continues, we will be forced to assume more risk, with steps that will progressively have far-reaching effects,” the secretary said.

…“If sequester continues and the continuing resolution is extended in its current form, other damaging effects will become apparent,” Hagel said

To be fair, it’s quite possible that Hagel is just reading scripted lines intended to make it seem like the Obama administration had the sequester forced upon it. Much of the debate about budget cuts has been characterized by this skirting-the-blame rhetoric.

But his comments demanding “an end” to the “abrupt and arbitrary cuts” are dishonest on another level: the sequester is not harmful to national security or to our military “readiness.” The “cuts” are puny. And they are not even cuts – they are gradual reductions in the rate of growth in spending on what Hagel very recently described as “bloated,” “wasteful,” and in need of some paring down.

4 thoughts on “Hagel Urges ‘An End to Sequestration’”