Senator Rand Paul’s historic filibuster is  ended late last night. At one point, he made a proposal. If adopted unanimously by the Senate, Paul said, he would end the filibuster immediately. 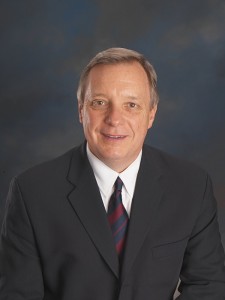 The proposal was a non-binding resolution opposing the President’s ability to kill Americans in drone strikes on US soil. Simple enough, you might think. Who could oppose that?

The Democrats, that’s who.

Senator Dick Durbin, speaking for the majority, rose to say he objects to Paul’s non-binding resolution. He objects to a unanimous statement from the Senate that the President cannot drop bombs on Americans on US soil. Durbin said he doesn’t want to make such a vote until we’ve had proper and thorough congressional hearings on all the issues Senator Paul has brought up today.

Or maybe it isn’t relevant. Truthfully, nobody should need to find additional reasons to condemn Dick Durbin after he rose in opposition to something as simple as opposing (in a non-binding resolution!) the President’s ability to kill citizens in drone attacks on US soil.

19 thoughts on “Sen. Durbin Objects to Resolution Opposing President’s Ability to Bomb Citizens on US Soil”