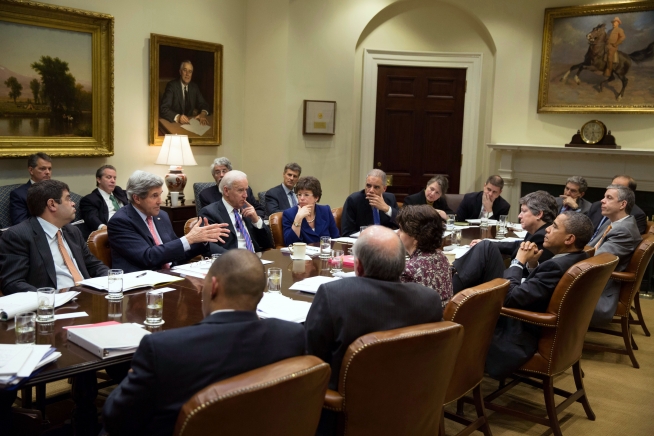 In an Op-Ed at The Boston Globe, Thanassis Cambanis argues one reason the Obama administration hasn’t directly intervened militarily in Syria is because the long, drawn out conflict hurts America’s geo-political competitors.

The war is also becoming a sinkhole for America’s enemies. Iran and Hezbollah, the region’s most persistent irritants to the United States and Israel, have tied up considerable resources and manpower propping up Assad’s regime and establishing new militias. Russia remains a key guarantor of the government, costing Russia support throughout the rest of the Arab world. Gulf monarchies, which tend to be troublesome American allies, have invested small fortunes on the rebel side, sending weapons and establishing exile political organizations. The more the Syrian war sucks up the attention and resources of its entire neighborhood, the greater America’s relative influence in the Middle East.

Last month I wrote a controversial post about Obama’s apparent “pro-Assad policy.” I say it was controversial because people worried about yet another US war in the Middle East have been arguing since the start of the Syrian conflict that it provides the US with an opportunity to topple the Assad regime, eliminate Iran’s major ally, and set up a new client state that would conform to US demands.

But as I wrote, that’s not what we’ve seen. It’s true that Obama has sent non-lethal and (indirectly) lethal aid to the rebels, despite the fact that the great bulk of the fighters who actually matter are jihadists. But the truth is, Obama has ruled out sending decisive aid, lethal or non-lethal, to Syria’s rebels. He reportedly overruled the suggestions of former Secretary of State Hillary Clinton, former Defense Secretary Leon Panetta, and Chairman of the Joint Chiefs Martin Dempsey – all of whom advocated arming the rebels. Instead, Obama made policy moves like designating the al-Qaeda in Iraq offshoot in Syria a terrorist organization and pressuring Saudi Arabia not to send heavier arms like anti-aircraft weapons.

In the last few weeks, it has been revealed that the CIA is boosting support to Iraqi militias (Baghdad is an ally of Assad) with the aim of clamping down on al-Qaeda affiliates there pouring into Syria to join the rebellion. The Obama administration even considered a request from the Iraqi government to use drones to bomb Islamist rebel forces along the Iraq-Syria border.

When I posed this “pro-Assad” hypothesis to former CIA intelligence officer and Antiwar.com columnist Phil Giraldi, he concurred.

“I think you are right that Obama has come around to the view that regime change is more fraught with dangers than letting Assad remain,” Giraldi said.

The ongoing conflict in Syria isn’t perceived in Washington as harming US interests, but – according to Cambanis – it is seen as draining the resources and influence of Iran, Hezbollah, and Russia. This is valuable to US strategists at a time when the relative balance of US power is seen as waning.

So despite the fears of non-interventionists, it doesn’t look like the Obama administration is prepared to impose regime change in Syria through military action, thereby draining more US resources, increasing anti-American sentiment, creating a power vacuum where jihadists are likely to seize power, and obligating America to another decade of wasteful counter-insurgency and  nation-building in the Middle East. Not when an ongoing stalemate does more for US interests.

17 thoughts on “Cold Geo-Politics on Syria”