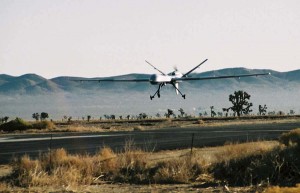 Drones are the weapon of choice for fighting undeclared wars all over the Middle East. Surveillance drones are on the cusp of becoming that for U.S. government and law enforcement officials as they continue their efforts to observe everyone as much as and as often as possible.

Today Real Clear Politics (RCP) has an article titled “Drones: Coming to a Sky Near You” and if that headline looks familiar, it’s because this is a familiar fear. Last year the FAA decided that by 2015, it must complete its guidelines on the integration of drones into U.S. airspace. Since that announcement, publications from The Miami Herald to Time have sounded a cautious alarm about the prospect of thousands of drones filling American skies by 2020. There seems to be a new article every day, lately none of them offering much beyond a restrained paranoia; a look at the State of the Union in terms of drones.

But maybe paranoia has done some good. RCP takes a look at recent push-back from various state bodies, including the Massachusetts legislature, noting that:

According to the National Conference of State Legislatures, 39 states are considering laws that would restrict drones. Virginia in February imposed a two-year moratorium on drone aircraft. Idaho this month passed a law prohibiting spying by drones without the consent of the persons being spied upon. Idaho state Sen. Chuck Winder (R), the bill’s author, said the measure was intended to “prevent high-tech window peeping.”

On the other hand, 39 states have also put their names into the federal hat to compete to be one of six states that will test integration of these unmanned  aerial vehicles into American airspace.

Last week the mayor of Boston suggested using drones for surveillance at next year’s marathon. This isn’t surprising, as the government is always fighting the last terrorist attack. No matter how unlikely there is to be another incident at any marathon, especially Boston’s; drones cruising above the runners in 2014 is one way to combine looking like you’re doing something, furthering a precedent for normalized, intrusive behavior, and making the burgeoning drone industry — which, by one estimate, may become a $90 billion one in the next decade — very happy. The reaction to the militarized police presence in Boston after the bombing has been mixed. Today former congressman Ron Paul suggested that the city-wide lockdown, the invasive searches and police presence should “frighten us as much or more than the attack itself.” But many people, especially in Boston, were just fine with cops that looked like soldiers patrolling the streets of an American city.

The RCP article also notes that the Department of Homeland Security — serving as the umbrella that covers both war and police issues and helps make them troublingly indistinguishable –will be offering grants to police departments in order to ease purchase of their own drones. No doubt this will prove irresistible to police departments. DHS has already played a generous part in the militarization of police in the last ten years with its grants for Bearcat armored vehicles and other SWAT-ready tech.

The power of drones abroad is obviously a more frightening animal. Today The Atlantic published an article headlined “Living in Terror Under a Drone-Filled Sky in Yemen”. If that exploration of the psychological (and physical) toll that the drone war puts on civilians looks familiar, perhaps you caught the recent study of the grim effects 24/7 hovering death-robots have on the collective psyche of Pakistani people. Drone use abroad continues to be supported by the majority of adult Americans, however.

The proliferation of drones will not long be an American issue alone. “The number of countries that have acquired or developed drones expanded to more than 75, up from about 40 in 2005, according to the Government Accountability Office, the investigative arm of Congress,” USA Today reported in January.

In spite of some heartening legislative attempts to rein in drones here at home, as well as protests over their international use, they cannot be fully put back into the box. That’s why endlessly rehashing the concerns that are fundamentally tied in with this technology is a good thing to do, even if it brings up a sense of Deja Vu for anyone even halfway paying attention. The RCP article contains no breaking news about drones, but the moment that such articles disappear, we’re in real trouble. That’s when drones have been fully accepted as the most efficient killing machines abroad, and the ideal mechanisms for surveillance at home.