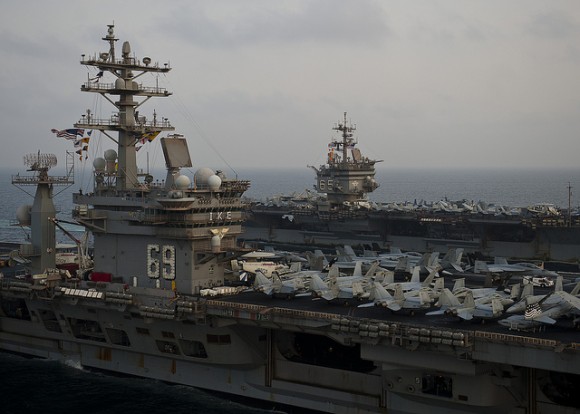 You won’t hear it put this way by anyone in Washington, but the main reason cuts to the defense budget are worrying officials is that they make it more difficult to police the world.

In Foreign Affairs, Michael O’Hanlon and Bruce Riedel suggest a cost-saving measure for America’s empire in the Middle East: opening more U.S. military bases in the region. Instead of relying as it has on expensive “aircraft carriers in and near the Persian Gulf,” the U.S. should move its military presence back onto land in at least three different Gulf states.

The primary purpose of having U.S. military bases peppered throughout the Middle East has traditionally been to exert control over geo-politically vital oil-rich countries and to allow for a rapid and coordinated use of military force at Washington’s command. As a Top Secret National Security Council briefing put it in 1954, “the Near East is of great strategic, political, and economic importance,” as it “contains the greatest petroleum resources in the world” as well as “essential locations for strategic military bases in any world conflict.”

O’Hanlon and Riedel don’t even consider the legitimacy of America’s military presence in the Middle East; for them, it is a natural law that can’t be questioned. So when faced with strained budgets that can’t support a sprawling, costly, and unwarranted empire, they try to figure minor cost cutting measures around the edges instead of reevaluating our military postures as a whole.

A CSIS report last year took a different tack, arguing that “disappearing finances; rising alternative power centers; declining US military predominance; lack of efficacy of key non-military instruments of power; and reduced domestic patience for global adventures,” all require a rethinking of U.S. grand strategy with an eye towards roll-back.

The very definition of grand strategy is holding ends and means in balance to promote the security and interests of the state. Yet, the post-war US approach to strategy is rapidly becoming insolvent and unsustainable – not only because Washington can no longer afford it but also, crucially, because it presumes an American relationship with friends, allies, and rivals that is the hallmark of a bygone era. If Washington continues to cling to its existing role on the premise that the international order depends upon it, the result will be increasing resistance, economic ruin, and strategic failure.

That first sentence there is one of the most honest you’ll ever see from an elite DC foreign policy think tank. U.S. foreign policy is ultimately promoting “the security and interests of the state.” It isn’t for your sake. It benefits the government and the private interests aligned with it.

What O’Hanlon and Riedel also don’t mention, except for a passing reference to “complex” “internal political factors” in Saudi Arabia and the 1998 Khobar Towers bombing, is that the problem with the U.S. military presence in the Middle East isn’t just its financial cost; it also generates widespread hatred and resentment of the U.S. government and was the underpinning of al-Qaeda’s propaganda aimed at motivating Muslims to attack America and Americans abroad. Huge majorities of people in the Arab world strongly object to the permanent U.S. military presence in their lands.

The nefarious nature of the U.S. presence was articulated fittingly enough by O’Hanlon and Riedel, however. The various U.S. aircraft carriers in the Gulf, each with about 72 fighter jets on board, are “to provide the airpower that [the U.S.] would need during a possible conflict with Iran.” We used to hear this rhetoric about Iraq back in the day. Experience should show it’s less a “just in case” kind of thing, and more a dependable military force to implement the expected U.S. war on Iran.

And finally, O’Hanlon and Riedel address the potential problems of building more land bases in the Middle East in the context of the rising political awareness and activism in the Middle East. It could be hilarious satire if they weren’t so sincere:

Some will argue that more planes on the ground in the Qatar and the United Arab Emirates would tie the United States even more closely to those countries’ royal families, at a time when the Arab Spring challenges their ability to hold onto power. The United States could also be implicated in any regime crackdowns against citizens. That is part of why the United States should diversify its combat airpower presence to at least two, if not three, places. But it is worth remembering that, in fact, the United States has already thrown its support behind those governments, and the Saudi royals, for years. In other words, the United States is already seen as being very close to them. Getting even closer will not change perceptions that much. It is, therefore, a tolerable additional risk.

The “risk” that more people get angry with the U.S. for propping up the brutal tyrannies in the Persian Gulf is “tolerable” because, heck, we’re already hated for that very reason! Might as well pile on! Notice that they don’t mention the moral questions of upholding mass political repression for millions of people across the region. They only care about perceptions it might cause, not the act of doing it.

105 thoughts on “The Empire Costs Too Much, In Cash and Conscience”