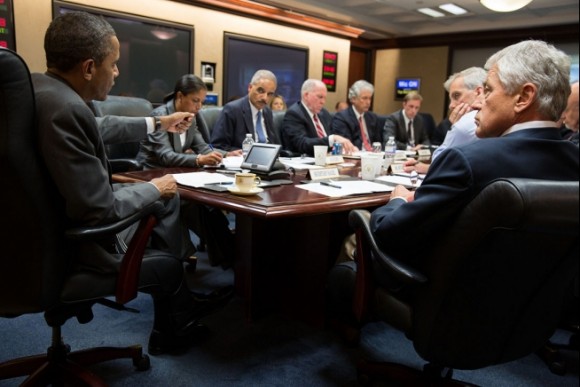 The Wall Street Journal is reporting that legal advisers to President Obama have warned him since the beginning that aiding the Syrian rebels probably violated international law and risked a direct conflict with the Assad regime.

The group’s arguments in part help explain why the White House agonized over Syria intervention and why Mr. Obama eventually opted to provide military aid to the rebels covertly through the Central Intelligence Agency, to help mitigate the legal risks and keep the U.S.’s profile low.

Two things are important here. First, this is a case in point for anyone who wonders whether the federal government is guided by the rule of law or operates on the basis of perceived interests. As can be consistently demonstrated throughout U.S. history, even if it’s illegal, the Executive Branch (which has usurped essentially all of the governments war-making powers) will still do it if they want to.

The second important thing to note is something I’ve argued before – namely that the government keeps secret those policies that would otherwise be subject to the law. As in the drone war, the administration knew very well that some judge could find what they’re doing to be criminal. Therefore, the administration classifies the program and blocks any attempt at judicial scrutiny on the basis of national security.

According to the WSJ, Obama’s lawyers were able to exploit what they saw as a loophole. Obama recently announced plans to begin direct arming of the Syrian rebels (as opposed to merely indirect arming, through Saudi Arabia and Qatar). The WSJ reveals what was behind that decision, explaining that Obama’s lawyers decided to exploit what they view as a loophole, taking the position that the aid would be acceptable under domestic U.S. law but not international law.

But for a long time this group of lawyers “parr[ied] calls for more assertive U.S. action by citing the risks of skirting international law, triggering a shooting war and setting legal precedents that could be cited by other countries, such as Russia and China.”

Some of the lawyers involved were uncomfortable with what they saw as a policy that could be seen as similar to the Reagan administration’s backing of Nicaragua’s Contra guerrillas in the 1980s.

Some of them cited a 1986 decision from the International Court of Justice on the American role in Nicaragua that said the U.S. was in “breach of its obligation under customary international law not to intervene in the affairs of another state.”

In that case, Reagan flagrantly dismissed the findings of the International Court of Justice that found America was acting criminally in Nicaragua. One thing that certainly hasn’t changed since 1986 is that America’s presidential administrations don’t submit themselves to the law. And Obama is dutifully following in that tradition.

See here for my latest piece in The Washington Times on how the flow of U.S. weapons into Syria  are getting into the hands of both pro-Assad militias and anti-Assad jihadist extremists.