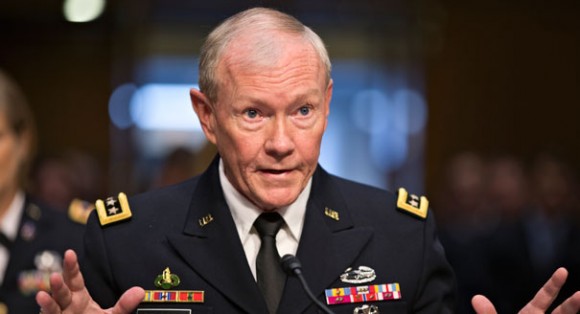 According to the nation’s top military officer, direct U.S. intervention in Syria would be extremely costly, risk mission creep, lend itself to unintended consequences, and may be ineffective.

Chairman of the Joint Chiefs of Staff Martin Dempsey has written a letter spelling out all the costs and risks of various kinds of U.S. military interventions in Syria. He writes that the decision to take military action shouldn’t be taken “lightly” and that such action would be “no less than an act of war.”

After all of those considerations, Dempsey makes clear that even if they all worked, weakening or toppling the regime “is not enough.” The U.S. would then be in the position of cleaning up the mess and that could mean another decade-long nation-building (and probably counter-insurgency) effort.

“We have learned from the past 10 years,” Dempsey writes, “that it is not enough to simply alter the balance of military power without careful consideration of what is necessary in order to preserve a functioning state. We must anticipate and be prepared for the unintended consequences of our action. Should the regime’s institutions collapse in the absence of a viable opposition, we could inadvertently empower extremists or unleash the very chemical weapons we seek to control.”

To close observers, though, this should be review. Dempsey and other military officials have been repeatedly issuing these warnings about the costs and (in)effectiveness of U.S. intervention in Syria for over a year now.

Here’s Secretary of Defense Chuck Hagel outlining some of the big picture risks at a Senate hearing last April: