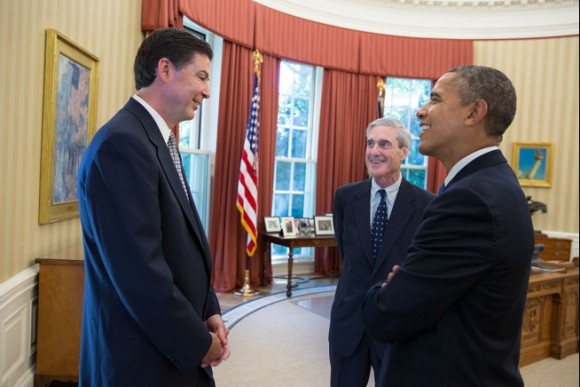 Last week, in a piece I wrote for The Huffington Post on the hypocrisy in the Bradley Manning trial, I argued that “The law is for the powerful to defy with impunity, and for the weak to be punished with.” As evidence, I mentioned several high crimes committed by the Bush and Obama administration, crimes for which they will never be prosecuted.

And then in yesterday’s USA Today I saw this remarkable article reporting that government documents show that the FBI committed 5,658 crimes in 2011 alone. That amounts to 15 crimes a day, on average, that FBI agents explicitly authorized. And far from being part of a rogue, covert program kept hidden from a judge, this is standard operating procedure on which the Department of Justice provides oversight.

The FBI gave its informants permission to break the law at least 5,658 times in a single year, according to newly disclosed documents that show just how often the nation’s top law enforcement agency enlists criminals to help it battle crime.

The U.S. Justice Department ordered the FBI to begin tracking crimes by its informants more than a decade ago, after the agency admitted that its agents had allowed Boston mobster James “Whitey” Bulger to operate a brutal crime ring in exchange for information about the Mafia. The FBI submits that tally to top Justice Department officials each year, but has never before made it public.

Agents authorized 15 crimes a day, on average, including everything from buying and selling illegal drugs to bribing government officials and plotting robberies. FBI officials have said in the past that permitting their informants — who are often criminals themselves — to break the law is an indispensable, if sometimes distasteful, part of investigating criminal organizations.

Let that last sentence sink in for a moment. The government must break the law in order to catch and punish lawbreakers. Does that not offend even the most superficial understanding of the rule of law this country was supposedly founded upon?

According to the USA Today report, this number of 5,658 crimes in one year barely scratches the surface:

USA TODAY obtained a copy of the FBI’s 2011 report under the Freedom of Information Act. The report does not spell out what types of crimes its agents authorized, or how serious they were. It also did not include any information about crimes the bureau’s sources were known to have committed without the government’s permission.

Crimes authorized by the FBI almost certainly make up a tiny fraction of the total number of offenses committed by informants for local, state and federal agencies each year. The FBI was responsible for only about 10% of the criminal cases prosecuted in federal court in 2011, and federal prosecutions are, in turn, vastly outnumbered by criminal cases filed by state and local authorities, who often rely on their own networks of sources.

“The million-dollar question is: How much crime is the government tolerating from its informants?” said Alexandra Natapoff, a professor at Loyola Law School Los Angeles who has studied such issues. “I’m sure that if we really knew that number, we would all be shocked.”

If you read Trevor Aaronson’s meticulously reported book The Terror Factory: Inside the FBI’s Manufactured War on Terrorism, you’ll get a glimpse into how the thuggery at the FBI works in the war on terror. Aaronson thoroughly documents all those “terror plots” that the FBI has “foiled.” By and large, the FBI uses untrustworthy delinquents as informants in order to entrap unsuspecting halfwits that never would have been able to carry out a terror attack without  FBI encouragement and facilitation.

Far be it from me to prejudge, but Antiwar.com has been requesting FBI documents on this website through the Freedom of Information Act since 2011, to no avail. Thankfully, the ACLU is suing on our behalf. Requesting surveillance of this website and its founders, as the FBI did, and suspecting we may be an agent of a foreign power – all for exercising our First Amendment rights- seems like it fits perfectly within the Bureau’s modus operandi.

52 thoughts on “Is the FBI a Criminal Organization?”