Following up on Kelley Vlahos’s brilliant post about the ongoing failure of the U.S.’s vaunted surge in Iraq, an important question arises as to why Iraq remains on the verge of civil war. It is not, as many seem to think, for mysterious and complex reasons that are too difficult to figure out much less solve. 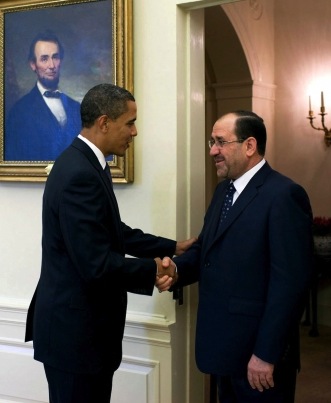 The Sunni-Shia violence in Iraq is, as the International Crisis Group (ICG) puts it, “as acute and explosive as ever” primarily because “Prime Minister Nouri al-Maliki has implemented a divide-and-conquer strategy that has neutered any credible Sunni Arab leadership.”

The question of Sunni Arab participation in Iraq’s political order that has plagued the transition since its inception is as acute and explosive as ever. Quickly marginalised by an ethno-sectarian apportionment that confined them to minority status in a system dominated by Shiites and Kurds, most community members first shunned the new dispensation then fought it. Having gradually turned from insurgency to tentative political involvement, their wager produced only nominal representation, while reinforcing feelings of injustice and discrimination. Today, with frustration at a boil, unprecedented Sunni-Shiite polarisation in the region and deadly car bombings surging across the country since the start of Ramadan in July, a revived sectarian civil war is a serious risk.

…The authorities also have taken steps that reinforce perceptions of a sectarian agenda. Prominent officials – predominantly Sunni – have been cast aside pursuant to the Justice and Accountability Law on the basis of alleged senior-level affiliation to the former Baath party. Federal security forces have disproportionately deployed in Baghdad’s Sunni neighbourhoods as well as Sunni-populated governorates (Anbar, Salah al-Din, Ninewa, Kirkuk and Diyala). Al-Iraqiya, the political movement to which Sunni Arabs most readily related, slowly came apart due to internal rivalries even as Maliki resorted to both legal and extrajudicial means to consolidate power.

The ongoing violence is so acute, writes Kelley, that Iraqis are dying in “numbers not seen since the bloody days of 2004.” And while the Sunnis blowing up cars in crowded markets is not to be excused, this crisis has its origins in Maliki’s ruthless marginalization of Sunni rule and his increasing authoritarianism in ruling Iraq.

Maliki, a Shiite, ordered the arrest of his Sunni Vice President Hashemi just as the last U.S. troops left Iraq. The U.S. ambassador to Iraq expressed approval in Januaryof this quest to detain Iraq’s vice president on trumped up terrorism charges, despite a virtual consensus that it was a blatant attempt to eliminate a political rival.

Maliki also betrayed an agreement that would have limited his ability to marginalize the Sunnis and turn the military into a sectarian force and ended up arresting hundreds of former Baath Party members on charges that they were involved in a coup plot. Because of the turmoil, Sunni and Kurdish blocs in the Iraqi parliament committed themselves to a boycott, and later threatened secession.

According to Ayad Allawi, the secular Shi’ite leader of the opposition Iraqiya bloc in parliament, Maliki’s security forces have detained and brutally tortured thousands of political opponents in secret prisons and denied them access to legal counsel.

It is not too much of a stretch to say that if Maliki’s government was more inclusive and democratic from the start, violence would not still be plaguing the country as they are at current levels.

What does this have to do with the U.S.? Well, aside from the fact that a great bulk of Iraq’s problems for the past 20 years are the result of dreadful U.S. foreign policy, the Maliki government’s current allowance from Uncle Sam is about $2 billion, not including the additional billions of dollars worth of military training and equipment.

Washington continues to handsomely reward the Iraqi dictatorship with vast amounts of arms and treasure even as its exclusivist, sectarian policies threaten to drive the entire country into a civil war that could conceivably rival Syria’s. And why are we doing this? Because we’re desperate for “influence” in a region we have dominated since WWII but is now in flux. The crafters of U.S. foreign policy are shaking in their boots, and no amount of bloodshed or despotism will throw them off their course – especially in Iraq.