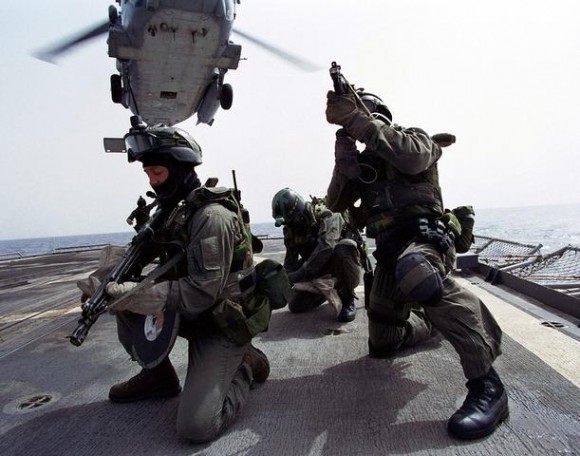 “The two U.S. commando raids in Libya and Somalia this month,” Jenkins argues, represent “a significant shift” that “has the potential to both reduce public hostility to the drones…and to improve intelligence by capturing rather than killing terrorist leaders.”

Mind you, Jenkins doesn’t express concern over the unlawfulness of the U.S. drone war or that it consistently kills civilians, as the two recent reports from Amnesty International and Human Rights Watch document. Rather, raids are better because they reduce public anger and provide the opportunity to obtain intelligence by putting detainees in a legal limbo on a ship somewhere in the ocean.

There is a lot of “psychological utility” in the use of raids over drones, Jenkins explains. “Now, America can turn things around,” he writes. “Terrorists want us to live in fear. We will make them live in fear.”

I know what you’re thinking: with a comment like that, this Jenkins guy belongs in a Hollywood movie!

Interesting you should say that, because Jenkins cites another advantage to special operations raids over drone strikes: it feeds Americans’ appetite for warrior praise. If Americans can glorify and exalt the bravery and sacrifice of U.S. Marines, it will go a long way towards regaining the public support for U.S. militarism that drone warfare has diminished.

War is not to be celebrated or romanticized, but movies such as Zero Dark Thirty and Captain Phillips provide images and narratives that sustain morale in a protracted conflict. These special operations raids contrast the courage and prowess of American warriors with the calculated savagery displayed by murderers of unarmed civilians, so dramatically demonstrated in the terrorist attack on the Westgate mall in Nairobi.

Among the many honors these two Hollywood jingo flicks have received, I’m sure it warms the hearts of the actors, producers, and directors that there is profound propaganda value in their work.

See here for some history on how Hollywood served a similar role for war propaganda back in WWII.

3 thoughts on “RAND Corp. on the Propaganda Value of ‘Captain Phillips’ and ‘Zero Dark Thirty’”