A new book has been published today that reveals for the first time the identities of a group of American activists who burgled FBI offices, stole sensitive documents, and leaked them to journalists. The fact that the burglary took place is hardly remembered by most Americans because it has been shadowed over by the revelations of the leak, which included the FBI’s unconstitutional program to crush domestic dissent, known as COINTELPRO. 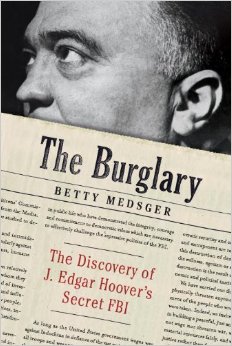 “They were never caught,” writes Mark Mazetti at the New York Times, “and the stolen documents that they mailed anonymously to newspaper reporters were the first trickle of what would become a flood of revelations about extensive spying and dirty-tricks operations by the F.B.I. against dissident groups.”

Betty Medsger, of the Washington Post, was one of the journalists to whom the activists leaked. She reported “what was perhaps the most damning document from the cache, a 1970 memorandum that offered a glimpse into Hoover’s obsession with snuffing out dissent,” Mazetti explains. “The document urged agents to step up their interviews of antiwar activists and members of dissident student groups.”

“It will enhance the paranoia endemic in these circles and will further serve to get the point across there is an F.B.I. agent behind every mailbox,” the message from F.B.I. headquarters said. Another document, signed by Hoover himself, revealed widespread F.B.I. surveillance of black student groups on college campuses.

But the document that would have the biggest impact on reining in the F.B.I.’s domestic spying activities was an internal routing slip, dated 1968, bearing a mysterious word: Cointelpro.

Neither the Media burglars nor the reporters who received the documents understood the meaning of the term, and it was not until several years later, when the NBC News reporter Carl Stern obtained more files from the F.B.I. under the Freedom of Information Act, that the contours of Cointelpro — shorthand for Counterintelligence Program — were revealed.

Since 1956, the F.B.I. had carried out an expansive campaign to spy on civil rights leaders, political organizers and suspected Communists, and had tried to sow distrust among protest groups. Among the grim litany of revelations was a blackmail letter F.B.I. agents had sent anonymously to the Rev. Dr. Martin Luther King Jr., threatening to expose his extramarital affairs if he did not commit suicide.

“It wasn’t just spying on Americans,” said Loch K. Johnson, a professor of public and international affairs at the University of Georgia who was an aide to Senator Frank Church, Democrat of Idaho. “The intent of Cointelpro was to destroy lives and ruin reputations.”

The burglary and subsequent leaks were vociferously condemned at the time. But soon the FBI’s abuses became the bigger story, and it led to serious reform efforts throughout the mid to late 1970s.

The FBI’s behavior under J. Edgar Hoover is almost universally condemned now (even by government officials, publicly at least). The burglars were never caught, but the man hunt for them didn’t continue because the consensus became that they did something good. They acted on behalf of the American people because the U.S. government was acting to extinguish the Bill of Rights. They broke the law, but the government’s crimes were worse.

The parallels to the leaks perpetrated by whistleblower Edward Snowden are hard to miss. I would predict the course of the current controversy will echo the 1971 burglary of FBI offices. Soon enough, those condemning Snowden as a criminal and a traitor will fizzle out behind a rising consensus that his “theft” of government documents leaked to journalists exposed high crimes of the state and was done for the public good. History is undoubtedly on Snowden’s side.

21 thoughts on “Lesson of History: Stealing From the Gov’t, Publishing Secrets, is Legitimate”