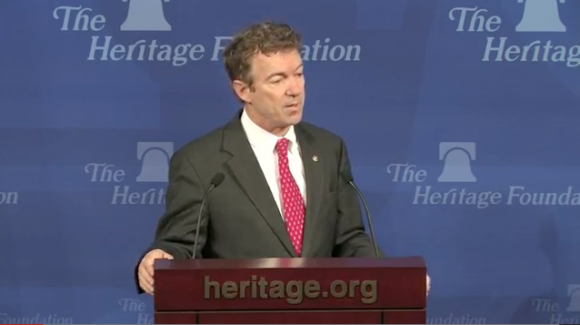 Colin Dueck, writing in Foreign Affairs, argues that Rand Paul’s foreign policy does not seem to be on the ascendency, as some have assessed. Not only does the GOP establishment oppose Paul’s less interventionist take on national security policy, but even the supposedly Tea Party leaning Republican base (essential in any 2016 presidential campaign scenario) is hawkish at its core.

Using Walter Russell Mead’s categorization of the conservative electorate’s foreign policy, Dueck describes Paul as a “Jeffersonian,” someone who “emphasize[s] the need to avoid military interventions abroad,” is concerned about the “corrupting effects of international warfare and power politics on American traditions,” and advocates the United States “keeping to its own affairs and not intervening forcibly overseas.” Contrasted with this is the Republican/Tea Party base, who Dueck describes as “Jacksonian,” who are “intense nationalists who take great pride in the United States’ military and prioritize protecting its sovereignty, honor, well-being, and security in what they view as a dangerous world.”

“Jacksonians,” Dueck writes, “are generally skeptical of elite-sponsored legal, multilateral, and idealistic plans for global improvement — hence the surface resemblance to Rand’s views. But once their country is at war, threatened, or under attack, Jacksonians tend to be relentless and unyielding.”

In my post yesterday pondering whether or not Paul’s foreign policy views are on the ascendancy in the GOP, I linked to a recent Pew poll that found a majority of Americans think the U.S. should mind its own business in the world. Dueck, though, thinks the Pew poll’s “less reported findings” reveal the more interventionist leanings of the Republican electorate.

The practical and current policy implications of the distinction between Jacksonian and Jeffersonian tendencies within the GOP can be illustrated by drilling down into some of the less-reported findings of that same Pew poll from December. The poll found that 63 percent of Republicans want the United States to remain the world’s “sole military superpower.” A whopping 73 percent of Republicans believe Iran is “not serious” about addressing concerns about its nuclear weapons program. Some 80 percent of Republicans believe the United States is “less respected” than it was a decade ago. (It is unlikely that those Republicans view this as a good thing.) The highest foreign policy priority listed for Republicans was “protecting U.S. from terrorism.” Moreover, the December Pew poll found that 51 percent of all Americans view Obama as “not tough enough” on foreign policy and national security, 37 percent view him as “about right,” and only five percent view him as “too tough.” It is more than likely that the proportion of Republicans, specifically, who view Obama as “not tough enough” is well above 51 percent.

These findings are consistent with similar foreign policy polls by Pew, Gallup, and numerous other organizations. Over 70 percent of Republicans support drone strikes against suspected terrorists (Wall Street Journal, June 5, 2013); favor airstrikes against Iran rather than allowing that country to develop nuclear weapons (Haaretz, March 19, 2013); believe that U.S. military spending today is either about right or too low (Gallup, February 21, 2013); and think the “best way to ensure peace is through military strength” (Pew Center, June 4, 2012).

This presents a problem for the GOP’s sincere Jeffersonians such as Paul. Jeffersonians feel that Obama should scale back on U.S. drone strikes overseas, cut military spending further, and make more of an effort to conciliate Iran. They believe that Obama has, on the whole, been too aggressive in pursuing a war on terrorism continued from the Bush era and, at the same time, insufficiently willing to pursue diplomatic engagement with rival powers. The problem for Paul is that this is not how most Republicans feel about Obama’s foreign policy. The most common GOP complaint outside the Beltway is hardly that the president is “too tough” when it comes to counterterrorism, or that he has not given diplomatic engagement with Iran and other countries enough of a chance. That might reflect the feelings of liberal Democrats. But Paul will not be running as a Democrat.

To be sure, the majority of grassroots conservatives are deeply skeptical of humanitarian intervention, Middle Eastern democracy promotion, foreign aid expenditure, and nation-building projects overseas — especially as handled by Obama. Insofar as Republican internationalists favor the any of those measures, they have yet to win over (or win back) the party’s base, and that does mark a striking shift from the George W. Bush era. Still, the decline of conservative GOP support for idealistic foreign policies hardly leaves the Jeffersonians as the only game in town. Today, as so often before, the pivotal foreign policy players inside the GOP are the hawkish American nationalists best described as Jacksonian. And if Paul’s speech earlier this month is any indication, he isn’t exactly speaking for them yet.

Bottom line: even in the current environment with an electorate that opposed intervention in Syria and prefers less intervention generally, Paul’s supposed front-runner position in the 2016 GOP field is not exactly on firm ground. Much of that sentiment rests on the Democratic side and, of course, Paul needs to primary with very active, very hawkish Republican voters.