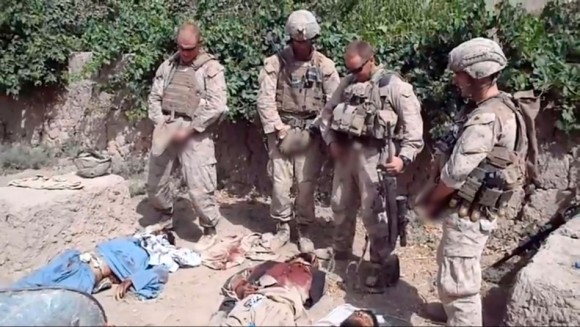 Two recent reports from Foreign Policy reveal that there is routine corruption at the Defense Department and that it even extends to covering up evidence of war crimes.

First, from Gordon Lubold, an article based on a July 2013 report compiled by the Defense Department’s General Counsel’s Standards of Conduct Office that catalogued ethical violations of employees. Here’s the lede:

Did you hear the one about the first lieutenant who had to pay $120,000 in fines for accepting bribes from contractors he’d awarded with lucrative Defense Department deals? Or the Navy civilian working who asked a fence contractor for a $5,000 payment so the contractor could be “recommended” for a $153,000 contract? What about the four senior officials, including two Air Force generals, a Marine general and a Navy admiral, who extended their stay in Tokyo to play golf at an illegal cost of $3,000 to the government?

The thing is, those aren’t jokes. They’re true stories. And they point to a growing problem within the military: a pattern of misconduct, misbehavior and outright thievery by senior generals, top Pentagon civilian officials and of course, the rank-and-file.

And then there’s Dan Lamothe’s exclusive on “an investigation into whether senior Marine Corps officers attempted to cover up their own misconduct while prosecuting war crimes in Afghanistan.” Remember the soldiers who were caught in a viral video peeing on dead Afghans? Well, apparently higher level officials tried to hide additional evidence in the case and, specifically, tried to classify evidence that would have incriminated them.

Three snipers who appeared in the video pleaded guilty to a variety of charges, including wrongful possession of unauthorized photos of casualties. At least five other Marines received non-judicial punishments.

While the criminal cases played out, top Marine officials abruptly classified the videos and other information collected despite protestations that it wasn’t legal to do so from classification experts in the military. Marine officials argued that releasing the videos and other information in the case could lead to new attacks American troops in Afghanistan.

That move outraged Maj. James Weirick, a Marine lawyer at Quantico, VA, who alleged that Gen. James Amos — the top officer in the Marine Corps and a member of the Joint Chiefs – or others acting on his behalf deliberately and unlawfully meddled in the prosecution of the Marines caught in the video to ensure that they received stiff punishments. Weirick also accused senior Marine Corps leadership of unlawfully classifying evidence in the case in an attempt to cover up their involvement in the case.

Not only does this raise questions about accountability mechanisms within the Pentagon and military systems, but it kind of flies in the face of our cultural and political obligation to exalt members of the military for “nobly protecting our freedoms” without any appraisal of their actual behavior. I’ve written about this before, noting that uncomfortable realities – like the rampant sexual assault and inordinate gang member representation in the military – are simply erased in order to maintain our automatic, society-wide praise for military service.

14 thoughts on “Pentagon Corruption Extends to Covering Up War Crimes”