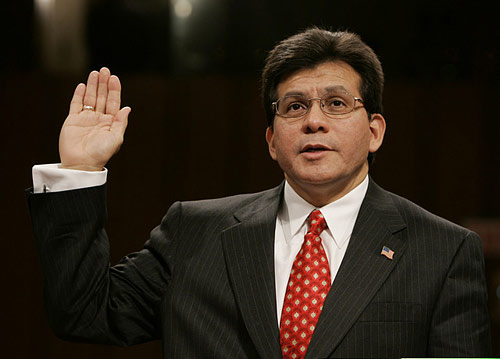 Brace yourself: George W. Bush’s former attorney general, Alberto Gonzales, is arguing publicly that the Obama administration’s drone war exceeds legal limits on executive authority. As anyone with a memory of Gonzales’s tenure under Bush knows, this is more than a little ironic.

For example, the Wall Street Journal reports, “Gonzales was a key figure in counterterrorism policies that placed executive power at the pinnacle, often at the cost of individual rights.” Gonzales supported the Bush administration’s denial of habeas corpus rights, torture, and warrantless NSA surveillance. Additionally, “the drone war began under Mr. Gonzales’s tenure, with a 2002 strike in Yemen that killed six people, including a U.S. citizen.”

Writing in the George Washington Law Review, however, Mr. Gonzales says current targeting practices may not be constitutional, and urges the legislative and executive branches to take steps to strengthen protections for citizens.

The 60-page article, “Drones: The Power to Kill,” focuses on President Barack Obama‘s decision to target Anwar al-Awlaki, a U.S. citizen killed by a 2011 drone strike in Yemen. Mr. Gonzales says that while he believes there was sufficient evidence to justify killing Mr. Awlaki, the decision-making process may fall short of standards established by a series of Supreme Court decisions since the Sept. 11, 2001 terrorist attacks.

“The Supreme Court has a role to play. As Justice O’Connor said in Hamdi, ‘a state of war is not a blank check for the President when it comes to the rights of the nation’s citizens,’” Mr. Gonzales writes.

Hamdi v. Rumsfeld is the 2004 opinion by Justice Sandra Day O’Connor that rejected the Bush administration’s claim to hold a U.S. citizen indefinitely as an enemy combatant. Mr. Gonzales was on the losing side of the case, as he was in three other enemy prisoner cases.

…According to remarks by Mr. Obama and Attorney General Eric Holder, various groups of “senior officials” and government lawyers determined Mr. Awlaki could not feasibly be captured and that killing him was appropriate.

Such a process may fall short of the Fifth Amendment, Mr. Gonzales said, which prohibits the government from taking a life “without due process of law.”

Let’s put to the side, for the moment, the issue of Gonzales as a walking contradiction. Instead, consider the weight of his claim that Obama’s drone war policies go to far in the way Americans’ constitutional rights. Coming from such a champion of executive power and, let’s face it, acting outside the law, it is much heavier.

But it’s important to note that we needn’t rely solely on Gonzales’s arguments here. Back in October, an investigation by Human Rights Watch found the Obama administration to have conducted the drone war in “violation of international law” on several occasions. Amnesty International also described the drone war as illegal, and called on U.S. authorities to “bring those responsible for unlawful drone strikes to justice in public and fair trials.”

A study from the Stanford and NYU schools of law found strong evidence that drone strikes have targeted rescuers running towards bombed sites in follow-up attacks, something the UN special rapporteur on extrajudicial, summary or arbitrary executions, has said would constitute war crimes.

Michael Boyle, who was on Obama’s counter-terrorism advisory group in the run-up to the 2008 election, wrote in a study for the Chatham House journal International Affairs that the drone war’s legality was dubious and that Obama “has been just as ruthless and indifferent to the rule of law as his predecessor.”

I could continue. The problem is that no matter how many lawyers, UN officials, academic studies, and former Bush cronies question the legality of Obama’s drone war, in the end the administration gets to choose whether or not to allow these questions to be settled in the courts. So far, Obama’s policy has been to block all attempts at judicial scrutiny in the name of state’s secret privileges.

So, yeah, it can be kind of hard to prove in a court of law whether or not an action is illegal if the government refuses to be subject to those courts. Right, Alberto?