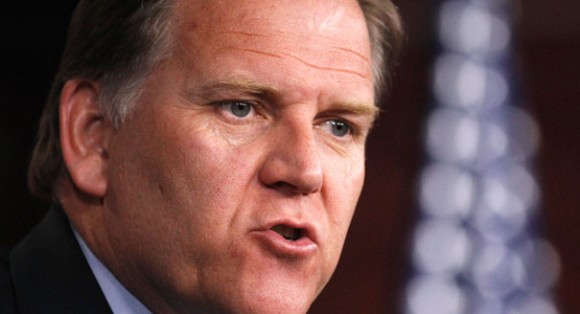 Rep. Mike Rogers, one of the most doggedly pro-NSA figures in Congress, is once again making claims for which he presents zero evidence and which contradict findings from the intelligence community. Specifically, he is going on television to claim Edward Snowden is a double agent for the Russians.

That suggestion came from Representative Mike Rogers, the Michigan Republican who is chairman of the Intelligence Committee.

Mr. Rogers had previously raised the possibility that Mr. Snowden, the former National Security Agency contractor, might be working for Russia, though the congressman has yet to offer any evidence. His assertions on Sunday, however, were his most sweeping to date.

“Every counterintelligence official believes that,” Mr. Rogers said on the NBC News program “Meet the Press.” “You won’t find one that doesn’t believe today he’s under the influence of Russian intelligence services.”

Actually, I know of one official who doesn’t believe Snowden is working with Russian intelligence services: Rick Ledgett, the guy who leads the NSA’s task force on Snowden’s leaks. That task force, according to a Reuters report, “found no evidence that [Snowden] had help either within the NSA or from adversary spy agencies.”

The FBI has also concluded that Snowden “worked alone.” Indeed, in the final paragraph of the New York Times article reporting on Rogers’ latest allegations, it is reiterated: “There has been no public indication that investigators for the F.B.I., the N.S.A. or the Pentagon have uncovered evidence that Mr. Snowden received assistance from any foreign intelligence service.”

So what the hell is Mike Rogers talking about? Notably, Rogers has also made other outlandish allegations on the NSA scandal, claiming last month that Glenn Greenwald had been “selling his access to information” for his own “personal gain.” When he said this, I called his office and was directed to the House Intelligence Committee’s Spokesperson Susan Phalen, who insisted, “Chairman [Rogers] does not make such statements casually.” When I pressed her for one iota of evidence for these very serious claims, she said she “can’t divulge.”

In other words, there is no evidence. And the claims Rogers has been making about Snowden directly contradict the findings of both the FBI and the NSA. So why is he making these claims?

I have some guesses. One guess is that he is trying to demonize Snowden for propaganda purposes and thereby turn public opinion against him. This is especially plausible after the demonization of Russia following Ukraine crisis, since hatred of Russia is higher than at any time since the Cold War. Another possibility is that he is trying to stoke outrage and gather support within the government to violate Snowden’s asylum, use force to apprehend him, and punish him, thereby discouraging further leaks and staving off the momentum for reform.

The real tragedy here is that no interviewer ever seems to be willing to exhibit the slightest skepticism when Rogers makes these evidence-free claims. The willingness of the press to simply take his words for granted because he is the chairman of the House intelligence committee is astounding.