We know a lot about the crimes committed by the U.S. government during the Cold War, but there remain areas of Cold War foreign policy almost completely hidden from the public. One of those dark areas is the U.S. role in the overthrow of a democratically elected government in Brazil in 1964. 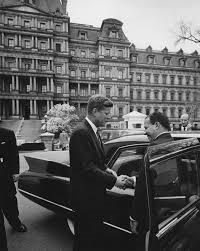 Yesterday, the National Security Archive posted transcripts of taped conversations in the Kennedy White House about deposing the Brazilian government. April 1 marked the 50th anniversary of the coup.

Almost two years before the April 1, 1964, military takeover in Brazil, President Kennedy and his top aides began seriously discussing the option of overthrowing Joao Goulart’s government, according to Presidential tape transcripts posted by the National Security Archive on the 50th anniversary of the coup d’tat. “What kind of liaison do we have with the military?” Kennedy asked top aides in July 1962. In March 1963, he instructed them: “We’ve got to do something about Brazil.”

The tape transcripts advance the historical record on the U.S. role in deposing Goulart — a record which remains incomplete half a century after he fled into exile in Uruguay on April 1, 1964. “The CIA’s clandestine political destabilization operations against Goulart between 1961 and 1964 are the black hole of this history,” according to the Archive’s Brazil Documentation Project director, Peter Kornbluh, who called on the Obama administration to declassify the still secret intelligence files on Brazil from both the Johnson and Kennedy administrations.

Revelations on the secret U.S. role in Brazil emerged in the mid 1970s, when the Lyndon Johnson Presidential library began declassifying Joint Chiefs of Staff records on “Operation Brother Sam” — President Johnson’s authorization for the U.S. military to covertly and overtly supply arms, ammunition, gasoline and, if needed, combat troops if the military’s effort to overthrow Goulart met with strong resistance. On the 40th anniversary of the coup, the National Security Archive posted audio files of Johnson giving the green light for military operations to secure the success of the coup once it started.

“I think we ought to take every step that we can, be prepared to do everything that we need to do,” President Johnson instructed his aides regarding U.S. support for a coup as the Brazilian military moved against Goulart on March 31, 1964.

But Johnson inherited his anti-Goulart, pro-coup policy from his predecessor, John F. Kennedy. Over the last decade, declassified NSC records and recently transcribed White House tapes have revealed the evolution of Kennedy’s decision to create a coup climate and, when conditions permitted, overthrow Goulart if he did not yield to Washington’s demand that he stop “playing” with what Kennedy called “ultra-radical anti-Americans” in Brazil’s government.

Once in a while, it serves as a helpful reminder to draw attention to the fact that, during the Cold War, the U.S. felt it had the prerogative to covertly overthrow whatever government they wanted, any time they wanted. It’s a kind of refutation to the picture most Americans have of their freedom-loving, stars-and-stripes government. Much of the U.S. involvement remains secret, but anecdotes about these kinds of deplorable yet routine policies are almost completely unknown to the broader public.

Were these crimes? Yep. Does that matter? Apparently not.

15 thoughts on “Friendly Reminder: The US Helped Overthrow a Democratic Government in Brazil”