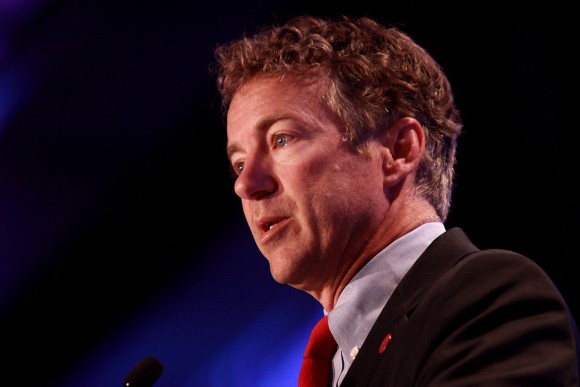 When faced with ideas of non-intervention in foreign policy, the most common refrain among hawkish Republicans is that such notions are naive, immature, unrealistic, and “wacko.” In reality, it is the foreign policy worldview of the Republican establishment that has been thoroughly discredited as naive and unrealistic.

What is most odd is that the right-wingers on the attack against the small libertarian-leaning wing of the party that opposes rabid interventionism seem thoroughly unaware that what they call “naive” foreign policy is actually backed up by history and much of academia.

Specifically, Lowry is upset about a YouTube video from 2008 that resurfaced depicting Paul skewering Dick Cheney and his motivations for the invasion of Iraq. Here are the key excerpts:

There’s a great YouTube of Dick Cheney in 1995 defending [President] Bush No. 1 [and the decision not to invade Baghdad in the first Gulf War], and he goes on for about five minutes. He’s being interviewed, I think, by the American Enterprise Institute, and he says it would be a disaster, it would be vastly expensive, it’d be civil war, we would have no exit strategy. He goes on and on for five minutes. Dick Cheney saying it would be a bad idea. And that’s why the first Bush didn’t go into Baghdad. Dick Cheney then goes to work for Halliburton. Makes hundreds of millions of dollars, their CEO. Next thing you know, he’s back in government and it’s a good idea to go into Iraq.

The day after 9/11, [CIA chief] George Tenet is going in the [White] House and [Pentagon adviser] Richard Perle is coming out of the White House. And George Tenet should know more about intelligence than anybody in the world, and the first thing Richard Perle says to him on the way out is, “We’ve got it, now we can go into Iraq.” And George Tenet, who supposedly knows as much intelligence as anybody in the White House says, “Well, don’t we need to know that they have some connection to 9/11?” And, he [Perle] says, “It doesn’t matter.” It became an excuse. 9/11 became an excuse for a war they already wanted in Iraq.

Detractors like Lowry condemn Paul for arguing Cheney pushed for the invasion of Iraq solely to benefit Halliburton. That doesn’t really seem to be what Paul was saying. He seemed to be making the rather benign observation that Cheney’s experiences working the “revolving door” of government-corporate-military-energy sector over many years probably had a deep affect on his foreign policy views.

And the latter point about how the Bush administration cobbled together unrelated evidence post-9/11 in order to pursue a war in Iraq that had already been decided upon irrespective of real evidence is just about as accepted a take on early Bush policy as there is.

Paul Pillar, who was head of the CIA’s MidEast division during the march to war, has spoken extensively on this point. He has explained that “a policy decision clearly had already been made [to invade Iraq],” and “intelligence was being looked to to support that decision rather to inform decisions yet to be made.” This was the impression of the Bush administration’s counterparts in Britain, as well, as the famous Downing Street memo showed (“the intelligence and facts were being fixed around the policy”).

If we launched the Iraq War for corporate profits, we have a poisonously corrupt government that is a threat to world peace. If we caused Japan to react angrily with ill-considered sanctions prior to Pearl Harbor, as Paul said in 2012, perhaps we were reaping what we sowed in what is usually regarded as one of the most notorious sneak attacks of all time. If we are guilty of tweaking Russia while it secures a traditional sphere of influence, as Paul said when the Crimea crisis first broke out, it’s no wonder that Vladimir Putin lashes out.

These are all straw-man versions of what Rand Paul has actually said. It’s a ridiculous over-simplification to say that “we launched the Iraq War for corporate profits,” and Lowry knows it. But this supposed conservative might want to consider the lionized figure of Dwight Eisenhower and his warning of “the acquisition of unwarranted influence…by the military-industrial complex.” If Rand Paul issued that warning today, instead of Eisenhower 53 years ago, Lowry would be calling Paul a radical leftist.

To suggest that Japan was influenced by U.S. economic embargo to attack at Pearl Harbor is hardly controversial, but it goes against conservatives’ belief in the infallible, almost divine behavior of America in WWII.

And “tweaking Russia” – I assume this refers to policies of post-Cold War NATO expansion and the like, which helped antagonize Russia – this is an argument so broadly accepted in the academic literature that it’s hard to avoid. Lowry worries Paul’s view on this is too immature for the White House, but it is the belief of people like Zbigniew Brzezinski, Henry Kissinger, and George Kennan as well. Lowry should know this.

Paul likes to calls his foreign policy “realism,” but his record on Russia suggests the label is inapt. Last year, he thought what was wrong with President Barack Obama’s Syria policy was that we weren’t engaging the Russians enough. Earlier this year, he held out the Syria chemical-weapons deal — a humiliation for the United States that secured Bashar Assad in power — as a model for future diplomacy. He thought the Russians were a partner for peace, right on the cusp of their launching a war.

Talk about immature. The diplomatic deal to peacefully rid Assad of his chemical weapons as an alternative to unnecessary and illegal war was “a humiliation for the United States”? Rand Paul was entirely vindicated on this point. It is Lowry and others who supported U.S. action in Syria – which we were all told was absolutely imperative and unavoidable for the sake of global security and American prestige – who were proven fools when the peaceful alternative saved the day.

Via Scott Horton, Jonathan Chait made a good point about the conservative hatred of Rand’s foreign policy. Paul criticized hawks who argue that containing a nuclear Iran is out of the question and that war is better than a nuclear capable Iran. Jennfier Rubin was outraged, obviously.

“It definitively de-Reaganizes him,” Rubin asserts. “The idea that Reagan would consider allowing a reckless enemy of the United States with terrorists at its beck and call get the bomb is preposterous.” Chait gently reminds us that Reagan illegally gave advanced weapons to Iran.

To which Rubin and every other Republican hawk say….”uh, what?”