Rand Paul may be on another collision course with the Obama administration over the issue of drones. According to Reason‘s Matt Feeney, Paul “has warned Senate Majority Leader Harry Reid (D-Nev.) that he will put a hold on one of President Obama’s appellate court nominees over his role in crafting justification of the assassination of Anwar al-Awlaki…” 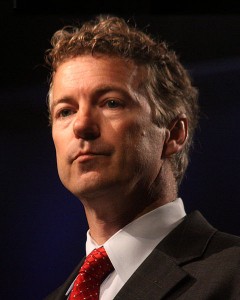 Rand Paul really rose to prominence following his 13-hour filibuster that held up the nomination of John Brennan to CIA Director. Paul delayed the confirmation until the administration answered his questions about the circumstances that must be met for the president to approve killing Americans with drones. Attorney General Eric Holder eventually answered him (read about that here). A chilling white paper was leaked to NBC news laying out the legal case for the Awlaki killing, and after that, in May, Holder sent a letter to Sen. Pat Leahy laying out their legal interpretations of the issue.

Incidentally, this hasn’t been enough for civil liberties advocates. Last month, in a case brought by the ACLU and the New York Times, a federal appeals court “ordered the release on Monday of key portions of a classified Justice Department memorandum that provided the legal justification for the targeted killing of a United States citizen, Anwar al-Awlaki.” The government has not fulfilled the court order yet and could still appeal the decision, taking the case to the Supreme Court.

Rand Paul’s decision to hold up the nomination of former Justice Dept. official David Barron will put pressure on the administration to obey the court and release the memos. It tough to predict if it will cause the administration to relent, but surely much of it depends on how determined Paul is – who will blink first?