John Bolton is confused. After spending years berating the Obama administration for failing to take action in Syria’s bloody civil war, he has come out against such an intervention…kind of. 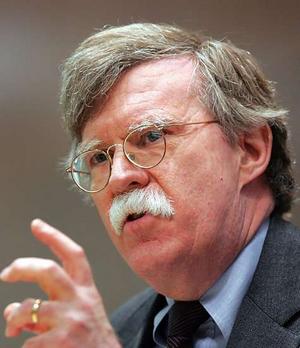 In a piece in the New York Post, Bolton criticizes the administration for “vacillating for three years on whether to arm ‘moderate’ opposition forces, by failing to uphold his ‘red line’ on chemical weapons and by indulging in rhetoric unaccompanied by action.” At the same time, he is coming out of the closet as against supporting the rebels or bombing Damascus: “Washington’s ability to affect the outcome in Syria is decidedly limited; aiding the rebels mainly increases the chances of an al Qaeda regime in Damascus — hardly preferable to the current bloodshed.”

Bravo! This is what non-interventionists have been saying since the beginning. But then, Bolton’s piece trades restraint in Syria for overthrowing the Iranian regime.

[T]he Assad regime, loathsome as it is, couldn’t survive without substantial Iranian assistance. And it is Iran, through its pursuit of nuclear weapons and its decades-long role as international terrorism’s central banker, which poses the central danger.

Instead of focusing on overthrowing Assad or aiding his enemies, we should be vigorously pursuing regime change in Iran.

As a justification for such a policy, Bolton cites “Iran’s unrelenting pursuit of nuclear weapons,” a premise that exists more in John Bolton’s head than in reality. Iran just finished engaging with all the world’s powers on an interim agreement that freezes or rolls back the entirety of Iran’s uranium enrichment program. Under the deal, Iran irreversibly converted its 20% enriched uranium and agreed not to enrich any uranium past 5%. Iran also agreed to having nuclear facilities inspected daily – not weekly – daily to ensure compliance. Last month, the BBC reported that the IAEA has been confirming all along the way that Iran is complying with its end of the deal.

That’s strange behavior for a regime that is “unrelenting” in its pursuit of nuclear weapons. Also strange that the entirety of the U.S. intelligence community believes Iran is not pursuing nuclear weapons.

Another reason Bolton cites for pursuing regime change in Iran is Tehran’s support of terrorist groups. Odd that he can make this argument mere inches away from where he argues that the U.S.’s support of rebel groups in Syria is equivalent to supporting “al Qaeda’s emirs.” The U.S.-backed Gulf states have proven some of the most effective international supporters of terrorism across several decades and especially since the war in Syria started. Is Bolton advocating we overthrow those regimes as well?

Bolton doesn’t come right out and say how the U.S. should overthrow the regime in Tehran. Or, more precisely, he stops short of advocating invasion and war. That’s what virtually all right-wing hawks have been doing: calling for Obama to take strong action, but failing to articulate exactly how, cognizant of the overwhelming public opposition to starting new and totally unnecessary wars.

By any reasonable metric, pursuing regime change in Iran either by gradual covert means or an Iraq-style invasion would be an extreme violation of international law. It would be a war crime with no conceivable security, strategic, legal, or moral justification. Bolton argues for this course of action without any reference to how such harebrained warmongering ended up in Iraq and without any mind to what it would cost and what the likely consequences of it would be. Like I said, the man is confused.