Jeju Island, South Korea – For the past two weeks, I’ve been in the Republic of Korea (ROK), as a guest of peace activists living in Gangjeong Village on ROK’s Jeju Island. Gangjeong is one of the ROK’s smallest villages, yet activists here, in their struggle against the construction of a massive naval base, have inspired people around the world.

Since 2007, activists have risked arrests, imprisonment, heavy fines and wildly excessive use of police force to resist the desecration caused as mega-corporations like Samsung and Daelim build a base to accommodate U.S. nuclear-powered aircraft carriers and submarines for their missions throughout Asia. The base fits the regional needs of the US for a maritime military outpost that would enable it to continue developing its Asia Pivot strategy, gradually building towards and in the process provoking superpower conflict with China.

"We don’t need this base," says Bishop Kang, a Catholic prelate who vigorously supports the opposition. He worries that if the base is completed, Jeju Island will become a focal point for Far Eastern military struggle, and that this would occur amid accelerating military tensions. "The strongest group in the whole world, the military, takes advantage of National Security ideology," he continues. "Many people make money. Many governments are controlled by this militarism. The military generals, in their minds, may think they are doing this to protect their country, but in fact they’re controlled by the corporations."

Jeju Islanders cannot ignore or forget that at least 30,000 of their grandparents and great grandparents were slaughtered by a U.S.-supported Korean government intent on crushing a tenacious democracy movement. The height of the assault in 1948 is referred to as the April 3 massacre, although the persecution and murderous suppression lasted many years. The national government now asking sacrifices of them has rarely been their friend.

But for the construction, Gangjeong seems a truly idyllic place to live. Lanes curving through the village are bordered by gardens and attractive small homes. Villagers prize hard work and honesty, in a town with apparently no need to lock up anything, where well-cultivated orange trees fill the eye with beauty and the air with inexpressible fragrance.  Peaks rise in the distance, it’s a quick walk to the shore, and residents seem eager to guide their guests to nearby spots designated as especially sacred in the local religion as indicated by the quiet beauty to be found there.

One of these sacred sites, Gureombi Rock, is a single, massive 1.2 km lava rock which was home to a fresh water coastal wetland, pure fresh water springs and hundreds of plants and animal species. Now, it can only be accessed through the memories of villagers because the Gureombi Rock is the exact site chosen for construction of the naval base. My new friend, Tilcote, explained to me, through tears, that Gureombi has captured her heart and that now her heart aches for Gureombi.

Last night we gathered to watch and discuss a film by our activist filmmaker and friend Cho Sung-Bong. Activists recalled living in a tent camp on Gureombi, successful for a time in blocking the construction companies. "Gureombi was our bed, our dinner table, our stage, and our prayer site," said Jonghwan, who now works every day as a chef at the community kitchen. "Every morning we would wake and hear the waves and the birds."

The film, set for release later this year, is called "Gureombi, the Wind is Blowing." Cho, who had arrived in Gangjeong for a 2011 visit at the height of vigorous blockades aimed at halting construction, decided to stay and film what he saw. We see villagers use their bodies to defend Gureombi. They lie down beneath construction vehicles, challenge barges with kayaks, organize human chains, occupy cranes, and, bearing no arms, surround heavily armed riot police. The police use extreme force, the protesters regroup and repeat. Since 2007, over 700 arrests have been made with more than 26 people imprisoned, and hundreds of thousands in fines imposed on ordinary villagers. Gangjeong village now has the highest "crime" rate in South Korea!

Opposing the real crime of the base against such odds, the people here have managed to create all the "props" for a thriving community. The community kitchen serves food free of charge, 24 hours a day. The local peace center is also open most of the day and evening, as well as the Peaceful Café. Books abound, for lending, many of them donated by Korean authors who admire the villagers’ determination to resist the base construction. Food, and much wisdom, are available but so much more is needed.

After seven years of struggle many of the villagers simply can’t afford to incur additional fines, neglecting farms, and languishing, as too many have done, in prison. A creative holding pattern of resistance has developed which relies on community members from abroad and throughout the ROK to block the gate every morning in the context of a lengthy Catholic liturgy. 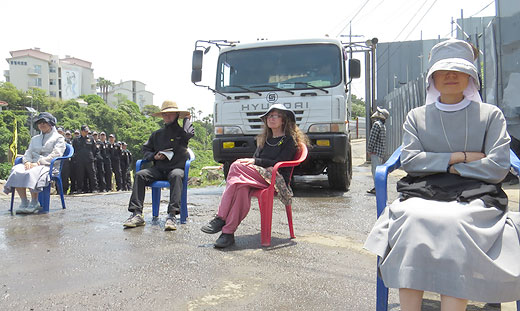 Priests and nuns, whose right to pray and celebrate the liturgy is protected by the Korean constitution, form a line in front of the gate. They sit in plastic chairs, for morning mass followed by recitation of the rosary. Police dutifully remove the priests, nuns and other activists about ten times over the course of the liturgy, allowing trucks to go through. The action slows down the construction process and sends a symbolic, daily message of resistance.

Returning to the US, I’ll carry memories not only of tenacious, creative, selfless struggle but also of the earnest questions posed by young Jeju Island students who themselves now face prospects of compulsory military service.  Should they experiment with conscientious objection and face the harsh punishments imposed on those who oppose militarization by refusing military service?

Their questions help me pivot towards a clearer focus on how peace activists, worldwide, can oppose the US pivot toward increasing militarization in Asia, increasing conflict with its global rivals, and a spread of weapons that it is everyone’s task to hinder as best they can.

Certainly one step is to consider the strength of Gangjeong Village, and to draw seriousness of purpose from their brave commitment and from the knowledge of what is at stake for them and for their region. It’s crucial to learn about their determination to be an island of peace. As we find ways to demand constructive cooperation between societies rather than relentless bullying and competition, their struggle should become ours.

8 thoughts on “A Pivot on the Peace Island”