If anyone wants to know what Afghanistan will look like whenever the United States finally gives up its meaningless occupation, take one look at Iraq. After 24 years of perpetual American war in Iraq – an invasion, a decade long no-fly zone, international sanctions, a second invasion, an occupation, the overthrow of a dictator and the installation of a puppet democracy – Iraq is anything but stable. Is this really any surprise? Over the past few months the international community has watched a group of Islamic thugs (ISIS) completely overrun the artificial Baghdad government, take possession of millions of dollars’ worth of American-made war material, and stage a number of gruesome public executions. The fact that there are people in the world who behave in such ways is a disgusting tragedy, but the chain of events that has led to such an outcome got a running start with the perpetual meddling in the region. The same recipe has been brewing in Afghanistan for the last 13 years and I expect that whenever the United States finally turns over the country to its inhabitants, parallel chaos will not be far behind it.

When you step off the plane at Bagram Air Base in Northern Afghanistan the first thing you notice (besides the mountains) are the sheer numbers of permanent structures, the hundreds of tons of concrete, and the immense inventory of Mine Resistant Ambush Protected (MRAP) vehicles that now litter the ground. Tent city and many of the plywood basic huts have long been replaced by rows of three-story steel buildings and permanent structures – what a difference a decade makes! Without question, the present situation is night and day from that of the horse soldiers whose original intent was at least morally justifiable – capture the man allegedly behind September 11th – Osama Bin Laden. Although the second invasion of Iraq sidelined the search for half a decade, it has now been more than three years since Bin Laden was executed and the continued American presence makes one wonder when the referendum on making Afghanistan the 51st state will be. So why hasn’t the United States left and what happens if the United States government ever does decide to come home? 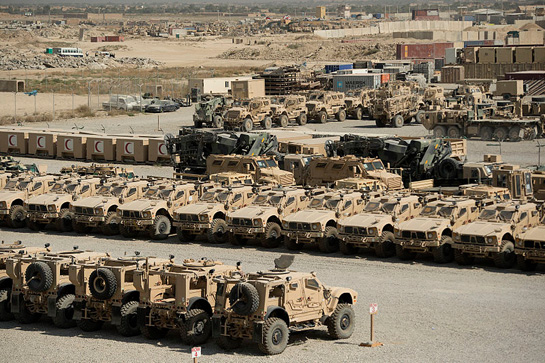 Why hasn’t the United States left?

The United States hasn’t left Afghanistan for several reasons: first and foremost, the United States government recognizes that the Afghani government is in shambles. Had US forces left in 2011 after Bin Laden was killed, what government exists in Kabul would have been overrun by the Taliban the instant the Americans took off – possibly while they were on the way out. The fact is that nation-building in such a ridiculously remote and ethnically fractional territory was doomed from the start – it is still doomed and will continue to be doomed indefinitely. There’s a reason Afghanistan is called "the graveyard of empires." That said, now that the American government has publicly committed to stability in Afghanistan (which is irrelevant to American national security and has nothing to do with September 11th), it would be embarrassing to miss the mark by too wide of a margin. Nobody in D.C. wants to lose face and even fewer wish to expose the emperor for what he is. Pride is the principal reason why the undeclared perpetual war against whomever rages on – more accurately termed imperial hubris. Having flown north of 500 hours in theater I can tell you from personal experience that the idea of preventing Afghanistan from becoming a terrorist safe haven is irreparably flawed – if anything, the American presence has emboldened terrorism, not rooted it out.

The second reason America hasn’t left is that American soldiers have built up legitimate relationships with many of the new Afghani soldiers and government officials (many of whom are decent people that want something better for their country). An American departure will leave these people extremely vulnerable in the absence of American protection. This is why so much time, money, blood, sweat, and tears have been expended trying to prop up the Afghan National Army (ANA) and Police (ANP) forces. It is very understandable that many of the American soldiers and government officials would have reservations about simply abandoning these people, but equally hard to believe that such a sheltered force (the ANA and ANP), artificially propped up by American forces, could build up a sufficient immunity to survive the real world out there on their own.Unfortunately and inevitably, all of the effort is going to be wildly insufficient. The central Afghani government is an experiment doomed to failure as American protection would be required for a century to sustain it. Simple economics rules this out as impossible. The Afghani government is artificial in that it lacks the organic support of an ethnically divided population and is hopelessly infected with sleeper Taliban agents. Very different from the average ANA, Taliban soldiers are ideologically driven, battle hardened, and relatively ruthless. They have fought the Soviet Union and the United States for a combined 20 years and they will eventually take over whenever the United States departs the country. The unfortunate fact is that trying to perpetuate an unsustainable political situation in Kabul only makes the fall that much more devastating whenever it comes. The present Afghani government would be wise to sue for peace with the Taliban. That is exactly what they are doing behind the scenes and it is a reality worth explaining honestly to the American people – the sooner the better.

The third reason America hasn’t left is that Afghanistan has strategic utility to anyone with hegemonic ambition in Washington DC Along with the American blue-water Navy and American bases in Turkey, Saudi Arabia, Djibouti, Oman, the UAE, Qatar, Bahrain, Iraq, Kuwait, Turkmenistan, Uzbekistan, Kyrgystan, Tajikstan, and Pakistan, Afghanistan provides a significant staging point for "American" "interests" in the region. The American presence in Afghanistan is easier to sell under the pretense of terrorism than the American presence in Iraq. More to the point, Iraq and Afghanistan bracket Iran and as such serve as a logistical staging ground to influence policy in Tehran. Iranian policy is important for two reasons: first, it is the world’s largest, yet to be exploited, owner of natural gas and a geographically important thoroughfare via land to Europe and via the Persian Gulf to the rest of the world. American, European, Russian, and Chinese oil companies are competing for access to Iranian reserves. Second, and less credibly, the danger to further proliferate nuclear weapons should be a legitimate concern to everyone inasmuch as it is actually real. Nuclear weapons in general are a danger to humanity. It is dangerous for the American government to have nuclear weapons just as much as it is dangerous for any other government to have them and a good starting point to dissolve any such Iranian ambition would be to lead by example and disarm. As a side note, this would be much more effective than bombing Iran.

What happens if the United States ever does decide to come home?

In short, the day the American military leaves Afghanistan is the day the Taliban and their ideological allies start to officially take over the government of Afghanistan. At this point the situation will start to look eerily similar to what we are seeing in present day Iraq. The sequence of future events should look something like this:

If the future looks anything like the past, that’s what I would expect. History is a prolific teacher.

Justin Pavoni is an Air Force officer and former F-15E evaluator pilot. Pavoni has deployed twice to Afghanistan, served as a Special Operations liaison, and has flown 550 combat hours. Justin and his wife are in the process of leaving the military as conscientious objectors.

6 thoughts on “Iraq: A Mirror for Afghanistan’s Future”