From the Institute for Public Accuracy:

A billboard challenging Amazon to fully disclose the terms of its $600 million contract to provide cloud computing services for the Central Intelligence Agency has been unveiled at a busy intersection near Amazon’s Seattle headquarters.

The billboard’s launch — asking “the $600 million question: What’s the CIA Doing on Amazon’s Cloud?” — marks the escalation of a campaign by the online activist organizations RootsAction.org and ExposeFacts.org. The groups are calling for accountability from Amazon in an effort to inform the public of serious privacy implications of the Amazon-CIA collaboration. (ExposeFacts.org is a project of the Institute for Public Accuracy.)

The positioning of the 48-foot-wide billboard on Amazon’s doorstep at Fairview Avenue and Valley Street in Seattle follows a RootsAction petition calling for Amazon founder and CEO Jeff Bezos to make a legally binding commitment to Amazon’s commercial customers that it will not provide customer data to the CIA.

Amazon is the world’s largest online retailer. “The same company that stores vast quantities of customer records and even provides cloud storage services also stores the CIA’s surveillance data — yet the actual terms of the Amazon-CIA agreement are secret,” said Norman Solomon, executive director of the Institute for Public Accuracy and a co-founder of RootsAction.org. 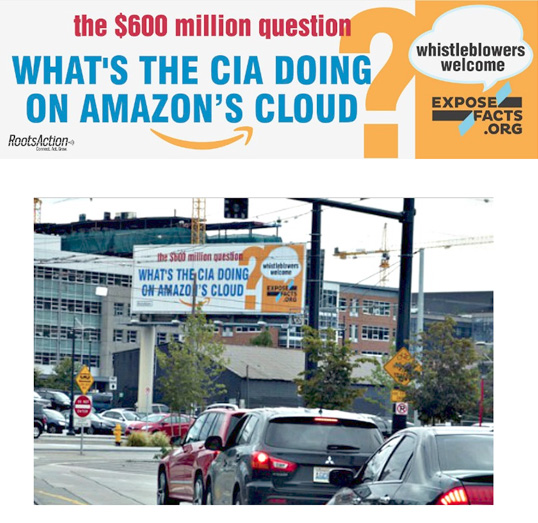 “Amazon now averages 162 million unique visitors to its sites every month,” Solomon said. “The firm’s business model depends on accumulating and analyzing huge quantities of personal data. Meanwhile, the CIA depends on gathering and analyzing data to assist with surveillance as well as U.S. military interventions overseas. The circumstances are ominous.”

In hosting a huge computing cloud for the CIA’s secrets, Amazon now has “a digital place where data for mass surveillance and perpetual war are converging,” he added. The CIA is responsible for numerous war-related programs including drone strikes.

Marcy Wheeler — who writes widely on the legal aspects of the “war on terror” and its effects on civil liberties including her “Right to Know” column for ExposeFacts.org — said Wednesday that Amazon should answer a number of key questions before its customers and the general public can be assured that personal information from the company’s commercial operations is not finding its way into the CIA’s hands.

For instance, she said, Bezos and Amazon should answer the question: “Will there be any overlap between the physical hardware serving Amazon’s commercial cloud service and what is provided to the CIA?”

Referring to the CIA’s machinations over the still-unreleased Senate torture report, she added that Bezos should also be asked: “The CIA has admitted accessing documents made available to the Senate Intelligence Committee on shared space — what provisions have you made to prevent similar spying on Amazon’s commercial customers?”

Wheeler also noted that according to the Electronic Frontier Foundation, Amazon is “one of the only major cloud providers that doesn’t provide a transparency report of government requests.” In light of Amazon’s CIA contract, Bezos should be asked: “Do you believe your cloud customers should have some visibility of how you respond to government requests?”

Amazon’s current “Privacy Notice” to customers reads: “We release account and other personal information when we believe release is appropriate to comply with the law; enforce or apply our Conditions of Use and other agreements; or protect the rights, property, or safety of Amazon.com, our users, or others.”

Solomon said this notice “has loopholes big enough to fly a drone through.”

After Amazon Web Services was awarded the $600 million cloud contract last year, Amazon declared: “We look forward to a successful relationship with the CIA.” Industry experts have said this contract will likely open the door for Amazon to get more cloud contracts from other government spy and military agencies — hardly a reassuring prospect for the privacy of Amazon’s customers.

MARCY WHEELER, emptywheel at gmail.com, @emptywheel
Wheeler writes widely about the legal aspects of the “war on terror” and its effects on civil liberties. She blogs at emptywheel.net and writes the “Right to Know” column for ExposeFacts.org.

NORMAN SOLOMON, solomonprogressive at gmail.com, @normansolomon
Solomon is the author of many books including War Made Easy: How Presidents and Pundits Keep Spinning Us to Death. He is the executive director of the Institute for Public Accuracy and a co-founder of RootsAction.org.