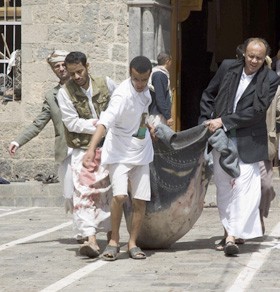 On the morning of March 18, Eric Garris, founder and webmaster of Antiwar.com, received a form email from Google AdSense informing him that all of Antiwar.com’s Google ads had been disabled. The reason given was that one of the site’s pages with ads on it displayed images that violated AdSense’s policy against “violent or disturbing content, including sites with gory text or images.”

Of course the images in question were not “snuff,” or anything intended for titillation whatsoever. They were the famous images of detainee abuse at the Abu Ghraib US military prison in Iraq. Those images are important public information, especially for Americans. They are the previously secret documentation of horrific state violence inflicted in our name and funded by our tax dollars.

They are also eminently newsworthy because they show the government wantonly generating insecurity for the American public. Such abuse fuels anti-American and anti-western rage that can culminate in acts of terrorism. For example, it did just that in the case of Chérif Kouachi, who took part in one of the Paris terror attacks of early this year after becoming radicalized by learning about the Abu Ghraib abuses.

Indeed many apologists for such abuse fully acknowledge this blowback effect, since they expressly cite it as the main reason for blocking the release of abuse photos. Of course they ignore the fact that this danger they acknowledge is an excellent reason not to commit such abuses in the first place. And they are naïve if they really think word wouldn’t get out about such abuses among Iraqis and Muslims in general even without the photos. The dissemination of such photos chiefly serves to ultimately make terrorist attacks less likely by driving a disgusted American public to demand an end to such terrorism-inducing abuses.

The newsworthy nature of the photos made no difference to Google; or it made altogether the wrong kind of difference. Either way, they were considered non-compliant, and so Antiwar.com’s AdSense account, along with its revenue, were suspended immediately.

This struck Garris as odd. In all his years administering web sites, he had previously run into content policy issues with AdSense around half a dozen times. Each time, Google had not immediately disabled the ads, but instead gave the customer 72-hours to fix the violation. In fact, he had never heard of AdSense suspending an account without warning until this incident. Why the suddenly draconian response this time? Also, the Abu Ghraib page had been public for 11 years. Why the sudden concern about it only now?

In so many ways, this action struck Garris as radically unfair and quite possibly politically motivated. So he took to the Antiwar.com blog and wrote post raising hell about it. You can’t survive a decades-long career in anti-war activism (including an ongoing legal battle with the FBI over that agency monitoring Antiwar.com without cause) without developing a pugnacious streak. He remarked that the timing of the out-of-the-blue enforcement was highly suspect: coinciding as it did with the US gearing up for a re-invasion of Iraq, which will surely be accompanied by yet another wave of ugly violence and abuse.

The next morning, Gawker picked up the story. Garris told me that within 10 minutes of the sympathetic Gawker post appearing, he was contacted via email by someone from Google’s Public Relations department.

The PR guy struck a conciliatory, even apologetic note:

Our media team noticed your blog post and informed me regarding the issue you raise in your post.

I am very sorry that you had this experience, as we should have warned you before blacklisting the site, which we didn’t. Our warning would have mentioned simply removing our AdSense code from the Abu Ghraib page, which would allow you to continue earning money on the other pages of your site that were not in violation of any AdSense policies. At this point, please remove the ad code from this page and we can reinstate ad serving throughout your site. Once complete, please file a site appeal, and our team will review ASAP. Further, revenue earned to this point, and after reinstatement will not be affected.

Google does need to be very careful with this sort of thing, since we have to make sure that our ads do not appear on pages that violate any of our policies. There are surprising instances of bad actors out there, and even otherwise trustworthy publishers can end up being the victim of bad traffic. At the same time, though, partners like you deserve a better customer service experience even when there are problems. Your post has sparked conversation here?—?you have been heard.

Please feel free to reach out again if need be. While I can’t solve everything, I’m happy to hear from great partners like you directly.

As instructed, Garris removed the code and submitted an appeal that very day. After such a friendly email from the PR guy, he hoped to see the ads restored the next morning. The following day, not only were the ads still gone, but there was yet another message from AdSense in his inbox, informing him that his appeal was rejected because yet another non-compliant page was found: this one a report on the war in Ukraine that included an image of dead rebel fighters. (Contrary to various reports, Antiwar.com’s ads were never even briefly restored.) It read:

“Thank you for submitting an appeal. However, after thoroughly reviewing antiwar.com and taking your feedback into consideration, we are unable to enable ad serving to your site again at this time, as your site appears to still be in violation.

Please take some time to review your site again for compliance. When making changes, please note that the URL mentioned in your policy notification may be just one example and that similar violations may exist on other pages of your website. Appropriate changes must be made across your entire website before ad serving can be enabled on your site again.”

The PR guy’s message had basically been, “Sorry we didn’t give you fair warning! Just fix this one page, and we’ll have you back up in a jiffy!” The subsequent message from AdSense seemed to swap Officer Friendly with (aside from the obligatory “please and thank you”) a cross between the Colonel Klink and the Soup Nazi: “Until you scour every single page for total compliance, no ads for you!”

After receiving this scolding from the AdSense bad cop, Garris reached out again to the PR good cop, expressing his bafflement over Google’s new stringency.

Even if he could get the site “up to code,” what are the standards for future content? Are all casualties out? Only deaths, or grievous injuries too? How grievous? What if the body isn’t shown but only a blood streak? What about violence against property? A child crying beside the rubble of his home?

Are ads to only appear next to pictures of the comfortable and well-groomed elites who start wars and never the bloodied and bedraggled plebs who suffer them? If that’s the case, Antiwar.com would have so few ads as to hardly make it worthwhile.

Otherwise, what concrete instructions could he give his reporters, columnists, and bloggers? If none are possible, must Garris spend much of his time from now on playing “whack-a-mole” as new “violations” keep popping up? Will the site’s desperately-needed ad revenue suddenly dry up each time?

To help the PR guy understand his predicament, he shared with him a quandary he was dealing with at that very moment as he was preparing the front page for the next day. There had just been a wave of terror attacks in Yemen, and there was an aftermath photo of blood-splattered rescuers moving a victim in a makeshift stretcher. But you couldn’t actually see the victim. Would this be a violation?

The PR guy couldn’t answer yes or no. He said it depended on the context, and that:

“A good rule of thumb is if it would be okay for a child in any region of the world to see that image, it’s acceptable.”

This response was astounding to Garris on many levels. First of all “it’s for the children” is the standard excuse for censorship. Are all the millions of web sites that host Google’s ads now operating under the content standards of PBS Kids or Disney Jr?

And what is “any region of the world” supposed to mean? If you can’t judge based on the violence and suffering portrayed alone, what is the decisive “context”? Is it the identity of the victims and of the victimizers? Is the goal not to offend the parents of children in allied countries? Is it okay if the Yemeni had been suicide-bombed by an ISIS affiliate, but not if he had beenaerial-bombed by the Saudis? Would the prisoner abuse photos have been okay if they were from the time that Abu Ghraib was Saddam Hussein’s torture dungeon instead of America’s? Would the Ukrainian corpses have been okay had they been the victims of the eastern rebels, instead of the US-backed government in Kiev?

Also, if, as the PR guy conceded, it was a mistake that the account was immediately suspended after the Abu Ghraib photos were flagged, why did they make the same “mistake” the very next day by keeping the account suspended after discovering the Ukraine photo?

Having had enough of being jerked around, Garris wrote in an update:

“Antiwar.com has no intention of allowing Google to dictate our content. We are looking into alternate sources of advertising and will not likely be working with Google AdSense in the future.”

Now nobody is suggesting that Google should be forced to change its policy. Of course it has every right to refuse service to anyone for any reason. The issue is whether Google’s actions are shameful and corrupt, not whether they should be illegal.

War journalism and anti-war activism cannot be effectively pursued without war photography. This is true because such imagery conveys vital public information, and because one of the most effective ways of turning people against war is to vividly show them its horrors. Furthermore, independent web sites that cover war with small budgets and large traffic depend on ad revenue. So Google pulling ads on all of the AdSense customers who publish war photography amounts to a massive, debilitating boycott of independent online war journalism and anti-war activism.

Of course the war party in America would love nothing more.

34 thoughts on “Google Vs. Antiwar.com”