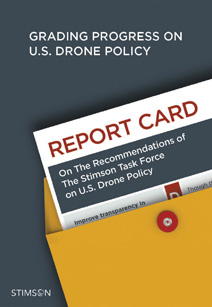 It has been two years since the US government-commissioned Stimson Task Force on US Drone Policy issued its first report in 2014. I found the text of that document rather gentle on the drone warriors, but was not too surprised to find the group affirming the right of the US government to use remote-control killing technology in its counterterrorism initiatives. After all, some of the task force members were involved in the drone industry and so could not be expected to object to the very idea of targeted killing. Given that the authors of the report were selected by the government to assess the government’s own program, it was something of a relief to find that there was any significant criticism at all. There seemed to be hope that the Obama administration would take appropriate actions in response to the Stimson Report recommendations:

The recently released “report card” finds that the drone warriors have done nearly nothing to address the concerns expressed in the original report.

My Conclusion: The US drone program is no more transparent than it was five years ago, when Anwar al-Awlaki and his son were executed by the US government in Yemen. There is no accountability for the deaths caused by the drone warriors. Now that drones are being exported not only by the United States, but also Israel and China, it seems safe to say that the genie let out of the bottle by Barack Obama when he chose to normalize assassination through the use of this new technology will be very difficult, if not impossible, to control.

There are no international norms governing the use of lethal drones, beyond the protocols already enshrined in the UN Charter, the Universal Declaration of Human Rights and the Geneva Conventions, all of which have been abandoned by the drone warriors, setting a danger precedent likely to be followed by future political leaders, as has already been done by British Prime Minister David Cameron, among others.

The use of lethal drones to kill potentially dangerous persons, including citizens, suspected of possibly conspiring to commit possible future crimes against the state remains and will remain President Obama’s lasting legacy.