Unfinished Portrait is a project in perpetuity, tracking the footsteps of our post- 9/11, post-Iraq War world. I began work on the project in 2005. And, today, eleven years later, the content and execution of this work has evolved, much like the illegal wars of Iraq and Afghanistan have themselves evolved, you might say.

The challenge for me, as an artist, has been how best to communicate the tragedy on all sides of these wars, and for audiences to get a sense of how many innocent people we’ve killed; to fill the artificial void between "us" and "them"; to create a space in which people can see the human toll and connect with both the invader victims and the invaded victims; to swallow the reality that there are no heroes here, only victims; and most importantly, to walk away with a question: can we honestly have the audacity to "feel safer" after all this?

In February 2008, on the fifth anniversary of the Iraq invasion, I installed Unfinished Portrait in a 35-by-45-foot room of a former paper company’s warehouse in Salina, Kansas, where I live. The walls, columns and ceiling of that room were painted black. Hanging on one of the black walls were twenty-five, one-by-one-foot wood panels painted in acrylic gouache with passport-size portraits of the first 3000 American troops who had died in Iraq. Some of those panels also included passport-size camouflage squares scattered here and there, representing troops and veterans who had committed suicide. The black area symbolized the Iraqi dead, who, because of their vast numbers and the lack of photographs, could not be memorialized individually. Had it been possible to cover the black walls, columns and ceiling with passport-sized painted faces of Iraqis, it would have portrayed approximately 375,000 of the people who had died as a result of the war; the number of dead was actually much larger. A plaque on the wall explained these numbers. 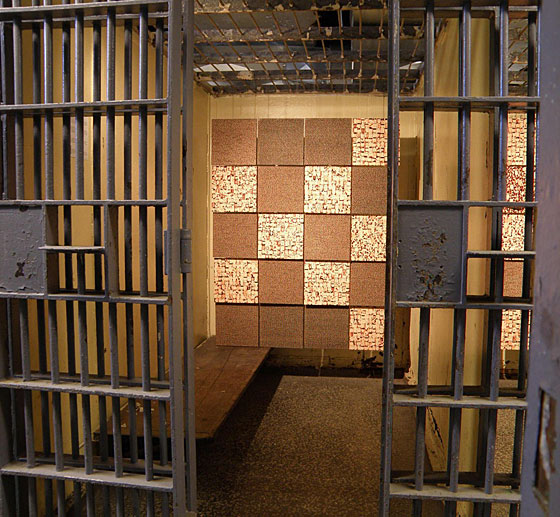 The floor was covered with a thick layer of sand, which by the end of the four-week exhibit was covered with viewers’ footprints. A looping piece of music, Mecca by artist Sheila Chandra, played in the background. The Urdu chorus translates as: At this moment we are in a sea of sentiment, and there is no shore in site.

I would say that maybe 10 percent of the people who viewed that 2008 exhibit reacted to the black walls that symbolized the Iraqis. Visible proof of that lay in the footprints, almost all of which went directly to the painted portraits of fallen soldiers, not to the vast black wallspace.

One could ask, "Well, why would anyone bother walking to a wall that was simply painted black?" Maybe some viewers felt that just being surrounded by the blackness was enough to get a sense of the disproportionate contrast between the American losses and the Iraqi losses. But in the many interactions I had with people who were there, almost everybody commented only on the painted portraits. And almost no one said anything about what that war has done to the country of Iraq and to her people. The work was largely treated as nothing more than a tribute to the U.S. troops, and, by implication, to their mission and actions. But that’s not how I had meant it.

I do recall one comment from an Iraq veteran to the effect that by juxtaposing the 5-by-5-foot area occupied by US portraits with the vast wall and ceiling space that represented the Iraqis, I was belittling the Americans’ sacrifice.  And I said to myself, at least someone gets it! Not that he was right about my intentions toward the troops, but he at least acknowledged that he was disturbed by the contrast between the magnitudes of their losses and ours.

When that first show ended in March, 2008, I tucked the painted portraits away in a corner of my basement for four years—frustrated that I had gotten through to so few people.

Early in 2012, I decided to re-create and expand the project, adding the victims of the Afghanistan war. I replaced Mecca with a 45-minute spoken-word performance, and I had scattered among the American faces an increasing number of camouflage squares representing the tragic new face of these wars: rapidly increasing suicides among combatants and veterans. Since 2001, the suicide rate among veterans has increased by nearly a third, with an average of 20 veteran suicides occurring per day in 2014.

I moved this new exhibit to an outdoor setting, with the spoken-word performances occurring after sunset, with the paintings and the readers facing the audience to the west. As darkness fell, the portraits faded from view, and four performers read from a script based on reports of the wars’ horrors, the blackness rising in the eastern sky served as a backdrop representing the hundreds of thousands of the people of Iraq and Afghanistan who have died.

This more conceptual approach—using the sky to commemorate the Iraqi and Afghan deaths—elicited almost no response from the audience. Another failure, to say the least.

Meanwhile, the "war on terror" has spilled further, across the border with Afghanistan into Pakistan. The Obama administration is coming up with new techniques on recruiting many more enemies for America through the unmanned drone program and obsessive spying, and I’m back to the gestural drawing board.

In 2013, I decided to illustrate the Iraqi, Afghan and Pakistani deaths not with vast stretches of blackness but by doing almost the reverse: squeezing the victims’ images into a physical space the same size as that used to portray the American losses. Doing so meant reaching back a century and a half to incorporate a second painting style into the work.

I adopted a variant of pointillism—a technique pioneered by Georges Seurat and Paul Signac in the nineteenth century—to portray the deaths of the invaded. With the American portraits now covering thirty-nine panels, each one-by-one-foot, painted with 120 faces, I produced additional thirty-eight panels to represent Iraqi, Afghan and Pakistani deaths. On each panel I painted precisely 8,836 tiny dots, using the same set of four desert-camouflage colors I’d used for the other portraits. One panel in the center of the work showed all – portraits of fallen soldiers, suicides, Iraqi, Afghan and Pakistani deaths, merging as one.

The work now had seventy-eight panels representing the first 344,926 people who died in these wars. According to the ‘Costs of War’ project based at Brown University’s Watson Institute for International and Public Affairs, more than 6,800 American service members have died in Iraq and Afghanistan, and at least 370,000 people have been killed by violence in Afghanistan, Iraq and Pakistan. Many more people have also died indirectly from the wars as a result of crumbling infrastructure, destruction of hospitals and environmental contamination.

In the work as it now stands, it is easy to spot the faces widely lauded as heroes; those portrayed in pure camouflage who, having taken their own lives, are regarded by the world’s largest military as an embarrassment; and those existing as tiny points of paint, whose faces are known only to family and friends—the invaded who died fighting the invaders, or as police, or journalists, or humanitarian workers, or an Iraqi child, or an Afghan woman out fetching water who was killed by a "precision" strike, or a US contractor earning a paycheck, or Bibi Mamana, the grandmother of eight-year-old Nabeela, who on October 24, 2012 was picking okra and gathering wood for Eid Al Adha before she was "literally hit flush and blown to smithereens" in a drone strike in Waziristan, Pakistan.

Viewed from a distance, everything blends together – all victims, all far away, faceless, uncountable, beyond our imagination, like Seurat’s points of paint. The piece is intended, you might say, as pointillism with a point.

One of the spaces I installed this version of Unfinished Portrait was at the 555 Gallery in Detroit, Michigan. At that time, the gallery was located in the Detroit Police Department’s former Third Precinct station. The work was installed in four jail cells, and the performance took place in front of the cells.

It was pure chance that the available space for the exhibit was in jail cells, but it turned out to be symbolic. The faces of the innocent people of all colors killed or imprisoned during our 21st-century wars are mirrored in the faces of the countless Americans needlessly imprisoned, whether in the local county jail or on death row.

Please click here to see more images of the project.

Unfinished Portrait: Made in the U.S.A

Most people in the United States think of our troops who are "fighting terrorism" as heroes. There is a great line in a songHoobaale by the Somali-Canadian poet, singer, songwriter K’naan….How can they go to war with terror when it’s war that’s terrorizin’. Terror is terror, whether the objective is Al Qaeda-sponsored, for example, or sponsored by a rich, powerful state; either way, the victims on both sides are mostly innocent civilians.

According to the Costs of War project, "the US invasion of Iraq has turned the country into a laboratory in which militant groups such as Islamic State have been able to hone their techniques of recruitment and violence. The formation of jihadi groups now spreading throughout the region counts among the many human costs of that war."

People living in war zones have been killed violently by the United States, its allies, insurgents and sectarians alike. Through the years, Unfinished Portrait has stayed consistent in attempting to document the human costs of these wars, irrespective of who does the killing, and how they die.

The next phase of this project will be updated to include victims of drone strikes and other covert operations in Pakistan, Yemen, Somalia and Afghanistan, as well as victims of international airstrikes in Iraq, Syria and Libya, and the victims of ISIS and other groups. I’m calling it Made in the U.S.A because while we exploit labor in places like China and Bangladesh to produce all the hundreds and thousands of junk products we consume, the one thing that is made here in the "great again US of A." is indiscriminate killings in the hundreds of thousands.

Now, thanks to dedicated people documenting more names, faces, and other details of Pakistani, Afghan and other non-U.S. citizen victims, I am able to include at least some of them in the work. So I hope that by October 7, 2017, the 16th anniversary of the war in Afghanistan, I will have an updated version of Unfinished Portrait in which people will be able to read the names and look into the faces of Afghans, Iraqis, Pakistanis, Syrians and others. How people will react to this new work? We will have to wait and see.

Priti Gulati Cox is an interdisciplinary artist, and a local coordinator for the peace and justice organization CODEPINK. She lives in Salina, Kansas, and can be reached at p.g@cox.net. Please click here to see more of her work.

2 thoughts on “Unfinished Portrait: Tracking the Footsteps of a Post 9/11 World”