Why does the U.S. military invest so much pride in working to the point of tedium, if not exhaustion? A friend of mine, an Army major, worked at the Pentagon. He worked hard during his normal shift, after which he did what sensible people do – he went home. His co-workers, noses to the grindstone, would hassle him about leaving “early.” He’d reply, I can leave on-time because I don’t waste hours at the coffee maker or in the gym.

A caffeinated emphasis on work and fitness, another friend suggested, may be a post-Vietnam War reaction to Secretary of Defense Robert McNamara’s “managerial culture” of the 1960s. As he put it, “One easy way of showing one has the ‘right stuff’ [in the US military] is to be an exercise nut, and the penumbras of that mindset have really distorted the allocation of effort in our military.”

Two recent examples of work- and fitness-mania are Army Generals David Petraeus and Stanley McChrystal. The US media extolled them as ascetic-warriors, yet both flamed out due to serious errors in judgment (Petraeus for an affair with his biographer, with whom he illegally shared highly classified information, and McChrystal for tolerating a climate that undermined his civilian chain of command). Asceticism and sweaty fitness routines, after all, are no substitute for sound judgment and a disciplined mind.

Busy-work within the military is related to Parkinson’s Law, the idea that work expands to fill the time allotted to it. In this case, with America’s wars on terror being open-ended, or “multi-generational” as the US military puts it, the “work” on these wars will continue to expand to fill this time, with the added benefit of “validating” the extra money ($54 billion in 2017 alone) being shoveled to the Pentagon by President Trump.

Along with busy-work are the virtues of suffering, as related by a societal celebration of Navy SEALs and similar special forces (“100 men will test today/but only three win the Green Beret”). I’ve lost count of the times I’ve read articles and seen films featuring these “supermen” and their arduous training. The meme of “sweet–and public–suffering” is related to the whole “warrior” ideal (more on this later) within the US military. There’s a self-righteous shininess here, a triumph of image over substance, or image as substance. (Being physically tough is of course an asset in close quarters combat, but it’s no guarantor of strategic sense or even of common sense.)

In the past, some of America’s finest military leaders had no shame in appearing common, most famously the “shabby” Ulysses S. Grant during the US Civil War.

Civil War officers – true citizen-soldiers, most of them – often had unruly hair and unkempt beards, but they sure as hell fought hard and got the job done. Nowadays, as another reader put it, “there appears to be a whole lot of Army officers who think a white sidewall haircut proves you’re a great officer. It actually is a homage to the Prussian Army that shaved its soldiers’ heads to prevent lice.”

Speaking again of image, let’s take a close look at the beribboned uniforms of today’s military officers. General Joseph Votel, presently US Centcom commander, is only the most recent example of an excess of ribbons, badges, and other devices: 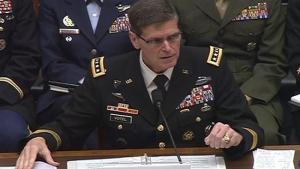 How did Marshall manage such military feats with so few ribbons? Nowadays, US generals sport more bling than the Kardashians.

But let’s return to the notion of US troops as “warriors” and “warfighters.” I’ve written extensively on this subject. I see today’s “warrior” conceit as a way of eliminating our democratic citizen-soldier ideal, making the US military a thoroughly professional force, subservient to the government and divorced from the people.

However, there’s another aspect to this “warrior” mythology, a powerful psychological one: the duping of the “warriors” themselves, distracting them from a bitter reality they may be little more than cannon fodder for greed-war.* The US military today is awash with warrior creeds that to me are antithetical to the citizen-soldier ideal of America.

To sum up the US military’s current ethos, then: We have a lot of guys who take great pride in constant busy-work and excessive physical exertion, sporting high and tight haircuts, their uniforms festooned with bewildering displays of ribbons and medals and badges, extolling a warrior code in the service of a government that tells them that multi-generational wars are unavoidable.

And so it shall prove, if these shadows remain unaltered.

*Thanks to Michael Murry for bringing my attention to how the semiotics of “warrior” are dramatically changed if we substitute “gladiator” for “warrior,” followed by less grandiose terms such as “those about to die,” i.e. as scapegoats to the king’s ambition, an insight he gleaned from reading Umberto Eco.