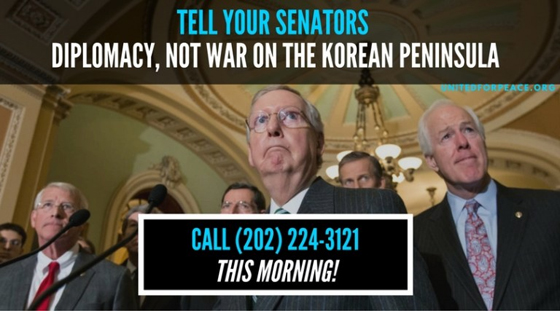 Amidst speculation about a potentially imminent nuclear weapon or missile test by North Korea, tensions on the Korean peninsula are rising to the highest level in decades, as US and North Korean officials posit threats and counter-threats of pre-emptive military strikes. Even hawkish former Secretary of Defense, Leon Panetta has warned: “We have the potential for a nuclear war that would take millions of lives. So I think we have to exercise some care here.”

Today, in an unusual and worrying development, all 100 U.S. Senators have been summoned to the White House for a closed briefing on the Korean situation by Secretary of State Rex Tillerson, Secretary of Defense James Mattis, Director of National Intelligence, Dan Coats, and Chair of the Joint Chiefs of Staff, General Joseph Dunford. The briefing will start at 3 pm EDT/at noon PDT.

Also today, in a stunning display of double standards, the U.S. Air Force plans to conduct a test launch of an unarmed Minuteman III intercontinental ballistic missile from Vandenberg Air Force Base in California. According to the launch commander: “These Minuteman launches are essential to verify the status of our national nuclear force and to demonstrate our national nuclear capabilities.” In other words, this test is intended to signal a credible U.S. nuclear threat. While you won’t probably won’t hear about the US missile test in the national media, you can be sure that North Korea is taking note. There is no military solution to the standoff on the Korean peninsula, which threatens to spiral out of control – potentially catastrophically. Both China and North Korea have proposed that the United States and South Korea suspend their large-scale annual military exercises in exchange for a freeze on North Korea’s nuclear and missile programs, but the U.S. and South Korea have refused even to discuss the offer.

It’s time to end US double standards. It’s time to stop making military threats and ratchet down the tensions on the Korean peninsula. One misstep could lead to the loss of millions of lives. Demand a diplomatic solution to the North Korean crisis. No military strikes. Start talking. If you get a response from your Senator’s office, please tell us about it, by writing to info.ufpj@gmail.com. Thank you for taking urgent action at this critical moment.