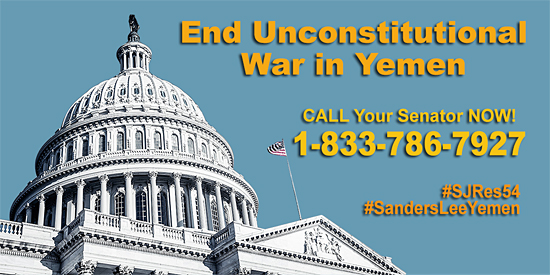 Next week, the Senate is expected to vote on ending U.S. military involvement in the Saudi-led war in Yemen, which has plunged Yemen into the world's largest humanitarian crisis.

S.J.Res. 54 would withdraw U.S. armed forces from this war that is now entering its third year. Because Congress has never authorized this war, this legislation is required to come up for a vote on the Senate floor in the coming weeks.

By providing mid-air refueling for Saudi and UAE bombers and weapons, intelligence, and logistical support for the Saudi-led coalition, the U.S. is complicit in violations of international law and in creating the world’s largest humanitarian crisis.

Invoking the War Powers Resolution to end the illegal U.S. war in Yemen will make history as a step toward restoring congressional authority over decisions about war as required by the Constitution. The bill will force the first-ever vote in the Senate to withdraw U.S. armed forces from an unauthorized war.

Millions of lives hang in the balance. Nowhere in the world does Washington have more leverage to stop millions of people from starvation than in Yemen, where more than 8 million people are on the verge of starving to death.

One thought on “Call Your Senator Today: End US Support for Saudi War in Yemen”